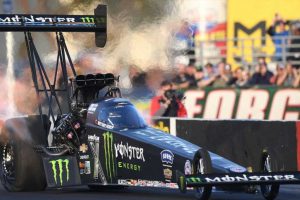 Top Fuel 2017 champion Brittany Force didn’t reveal much about John Force Racing’s plans to return to the dragstrip, but she did say Saturday night that her team is ready for the 2021 NHRA Camping World Drag Racing Series season-opener March 11-14 at Gainesville, Fla.

The team has been idle since last February, since the second race of the pandemic-shortened 2020 season, the Arizona Nationals, near Phoenix.

Force indicated she will return to competition at the storied Gatornationals, where she won her first Wally trophy in 2016.

Her team owner father, 151-time winner and 16-time Funny Car champion John Force, remains silent about the organization’s plans for this year and whether it will include three-time champion Robert Hight and 2019 NHRA rookie of the year Austin Prock. But Brittany Force attended last Saturday’s Monster Energy Supercross third round of its Indianapolis tripleheader at Lucas Oil Stadium and expressed her eagerness for the 2021 campaign to start.

Wearing a Monster Energy T-shirt that signaled the company’s likely return to at least partial sponsorship of her dragster, Force, 34, said in a television interview, “I’m excited. I’m pumped to be here. I’m actually doing a little team bonding with my team. They’re up in a suite up there, somewhere in the stadium. We kick off our season in a few weeks in Gainesville—the Gatornationals in Gainesville, in March, NHRA drag racing. So doing some team bonding.

“I’m getting so pumped up, just being at an event like this, fans in the stands, watching these guys. There’s nothing better than it. I love any type of motorsports. Drag racing, that’s home for me: 330 miles per hour in less than four seconds, 11,000 horsepower. There’s nothing like it. I love it and can’t wait to get back in the seat,” she said.

Force did not reveal whether her crew chief again will be Dave Grubnic or if any of her crew members returned after the team’s nine-race absence. She did say she was cheering for Eli Tomac, who finished seventh Sunday after claiming second third places in the first two Indianapolis Supercross events.

She was the No. 1 qualifier in each of her appearances last season, at Pomona, Calif., and Chandler, Ariz. The 10-time winner was second in the standings when her team suspended operations last March, and she finished 14th in the final points tally. Force owns the records for the quickest elapsed time (3.623 seconds) and fastest speed (338.17 mph) in NHRA history. She set both in 2019, at Reading, Pa., and Las Vegas, respectively.

Biker Sampey said she had been “consumed with sadness and disappointment,” assuming her decorated racing career was over after Harley-Davidson ended its longtime partnership with and factory support of Vance & Hines last November. She said riding one of the elite motorcycles for the past two seasons was “a dream come true for me.” She said that during a recent call from organization co-founder Terry Vance in which he was inviting her to race the new Suzuki, “he couldn’t finish his question” before she blurted out, “Yes! Yes! Yes!” She said, “I was overhwhelmed.”

Sampey acknowledged that Hines and Krawiec were her biggest rivals and said in a prepared video, “It’s going to be so different, because my biggest rivals, Andrew and Eddie, are now going to be my crew chiefs. I won’t be racing against them. I’ll be racing 100-percent for them and with them. They won’t have the distraction of riding themselves and all the things that go into riding and tuning the motorcycles. They will be 100-percent focused on my motorcycle, my engine, and me.

“And I am just so excited to see what the two of them will be able to do with that. Andrew tuned my motorcycle 100 percent last year. Eddie tuned his own. And Andrew had his own motorcycle. He’s the winningest racer in Pro Stock Motorcycle history. And now the only thing he has to focus on is one motorcycle and one driver,” she said.

Andrew Hines, who designed the new 1850-cubic-inch powerplant that is pushing 400 horsepower, has six championships. His older brother Matt has three, and Krawiec has four.

“Right now, this four-valve design is more powerful than the best of our two-valve motors. And there’s room to get better and faster with this architecture” Andrew Hines said.

Brittany Force and Angelle Sampey will be returning to the track in 2021. But will the fans? Or, will COVID-19 keep you home for another year? Start the NHRA talk in the comments section below.