Hot hatches under £10k | Six of the Best 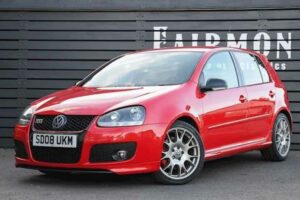 With recession looming, there's really only one sort of car purchase you need to consider…

If it feels like the car world has been droning on about the Mk5 Golf GTI for a long time now, that’s because it has – the first cars arrived in 2004. But its significance hasn’t waned; it seems unlikely there would have been so many spirited Golfs like the Clubsport had the Mk5 GTI not resurrected the iconic VW’s reputation as  a proper driver’s car. You simply can’t go wrong with one, every Mk5 variant looking great and driving well. But the Edition 30 was special, with another 30hp (for 230 in total) and pitch-perfect styling upgrades that made the GTI even more desirable. Still is to this day, in fact; a decent Mk5 might be half this money, but this Edition 30 is a fiver off £10k with 74,000 miles and beautiful condition. Worth every penny.

Indulge us a curveball here – the Impreza looked a little ahead of its time. Oh, how we mocked the hatch 15 years ago, because a proper Subaru had to be a saloon. Then the Cosworth came along, and 400hp in five-door was silly. Now it seems like barely a month passes without another uberhatch showing off fancy 4WD, loadsa turbo power and family car practicality. If only the WRX hadn’t looked so dowdy, Subaru might have been onto something years before the first RS3. As it is, the WRX is a worthy curio, with 230hp from its 2.5 boxer turbo and all that’s good about its symmetrical four-wheel drive. Certainly, nobody would expect the little blob to be so fast. This one isn’t quite standard (but isn’t far off) and is the cheapest of the group, at £7,795.

If a Fiesta ST is a bit predictable (and common), then you could do a whole lot worse than a Peugeot 208 GTI 30th. Not to be confused with the flaccid standard car, the limited edition 30th – which would later become the by Peugeot Sport production model – was a proper hoot. Had to be, really, as it was created to celebrate three decades of the 205 GTI, and Peugeot couldn’t muck that up. So the 30th was firmer, faster and just more fun than standard, with a host of little tweaks – lower suspension, wider tracks, new dampers, Torsen diff – making a profound difference. It was way more than another 8hp and some dubious two-tone paint. This 30th, number 197 of the 500 made (with 100 for the UK), is one of just 20 that made it here in Satin White, so it’s rare as well. Yours for £9k.

Another one for those willing to think a bit differently, and worth pushing the budget for. Because, yes, a Clio 200 (or a Megane) will still be sharper to drive than the Punto if that’s the most important thing. You probably knew that already. But the Abarth Punto has plenty going for it. After all these years it still looks brilliant, the 1.4-litre turbo ought to be as rorty here as in any Abarth 500, and rather unlike the littlest Abarth it’s a comparatively rare sight. In this colour with big bucket seats, a six-speed manual and so few around, it’s basically an old-school Ferrari hatchback. Maybe. As the more powerful 180hp Supersport, this Abarth Punto ought to be plenty fast enough, and at less than 10 years old with fewer than 50,000 miles it’ll have plenty of life – and many more entertaining miles – left to go.

It goes without saying that Ford has been at the cornerstone of the cheap hot hatch game for almost as long as there have been hot hatches to sell and people to buy them. Consequently, the list of possibilities is both long and distinguished – but you can hardly go wrong with a Focus ST in hard-charging second-generation format. Sure, the car was butt ugly out of the box, but it also famously received the 2.5-litre turbocharged motor that gave it a) an inimitable soundtrack and b) thrusting attitude in spades. Plus Ford sold them in colours like electric orange to double down on the ASBO vibe. In any other decade, the ST might’ve sunk to genuine pocket money values, but even in 2022 you’ll pay handsomely less than £10k for one with barely a smattering of miles. One like this, in fact.

Much like the Focus ST, the first examples of the second-generation RS Megane are hampered more by what came later than any glaring weaknesses of their own. The 265 Trophy nudged the game on very quickly, and then the facelifted 275 car suddenly made its predecessor look a bit dowdy. Of course, the good news is that all that trumping has made the seemingly more humble 250 even cheaper than it might’ve been – and to all intents and purposes, you’re getting much the same car as you would if you forked out twice as much. Even without the output cherry on top, it is a spellbindingly brilliant prospect. In fact, if driving thrills are your core hot hatch requirement, you can disregard the rest of this list: the Megane has that sewn up – even if you must make do with black-on-black.

Hot hatches under £10k | Six of the Best