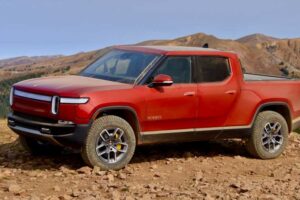 The first electric pickup trucks are finally arriving, and the ones we’ve driven so far—the 2022 GMC Hummer EV and 2022 Rivian R1T—are darned good. But as eye-opening as they’ve been, one aspect of their performance remains unknown: How well do they handle towing, especially over long distances? That answer, according to one new Rivian owner pulling a car across the country, is pretty well—provided you don’t mind stopping to charge for hours every day.

Instagram user and Rivian employee
@gideontherivian has been chronicling their trip in an R1T from Detroit to Los Angeles. Along the way, they’ve heavily relied on DC fast-chargers, often Electrify America stations at Walmart and Sam’s Club. They’ve been towing their Ford Shelby Mustang GT on a twin-axle trailer, which coupled with the truck itself pushes the Rivian’s gross vehicle weight to 14,260 pounds. Despite all that mass, the owner reports commendable performance from their truck, saying it’s quiet, comfortable, highly resistant to trailer sway, and plenty powerful. It does everything anyone could want of a tow pig—save for traveling long distances without needing to stop.

The owner says they’ve been tracking range and efficiency along their drive, though they’ve avoided addressing any questions thereon, only commenting that they marginally increased efficiency by upping tire pressure to their maximum rating of 80 psi. Even so, we think we know what kind of range they’re getting between charges, and it probably isn’t what you’ve come to expect from a gas or diesel pickup.

Rivian told us when we drove a (marvelous) pre-production R1T to expect towing to drag down the truck’s estimated 314-mile range by 20 to 40 percent. According to the automaker, a trailer’s weight is less consequential than its aerodynamic drag. As the owner says they’re not charging far past 80 percent to hasten recharges (which slow above that mark) and preserve the battery, and taking it no lower than a 16 percent charge, that means they’re using no more than 64 percent of its charge. Multiply those decimals together and they suggest the R1T with a trailer in tow is sustaining 121 to 161 miles per 64-percent charge. Maximum range with that trailer, then, would appear to top out between 188 and 251 miles.

The length of recharges varies widely, too, depending on the condition and layout of the charging station. Some chargers have been straightforward to access with a trailer, with stalls that can be pulled through, while others have required partially blocking traffic past or even unhooking the trailer entirely. Complicating things, not all chargers have worked as intended; some don’t put out anywhere near peak wattage, while a fair number of them are out of order. We and our sister site Car Bibles encountered similar problems while testing the Polestar 2.

“On average, we find about one of four chargers at a station is non-functional,” said @gideontherivian in an Instagram comment.

Even so, they report averaging 350 miles a day on their trip and traveling as far as 502 miles, though not by running the battery low. Instead, they’re stopping every 80 to 100 miles for shorter charges, stating they “increased our [sic] miles per charging time by over 20 percent by driving shorter legs and charging more often.”

Still, this long-haul capability isn’t in the same league as that offered by internal combustion-engined trucks, which while less refined and more expensive to refuel don’t need nearly as long to get back on the road. And if you’re the kind of person that can afford a $70,000 pickup truck, it’s probably not money that’s tight, but time.