Home » News & Features » How I upgraded from a used City to the new Tucson: A sequence of events

How I upgraded from a used City to the new Tucson: A sequence of events 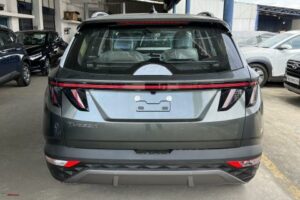 I had already booked the XUV700 AX7 AT by then but cancelled it to buy the Korean SUV.

BHPian SourPai recently shared this with other enthusiasts.

My previous ride was a Honda City 2013 Feb model S MT bought as used in Nov 2015 with 12K ODO reading via OLX. Before that, it was a humble Swift VXi. Honda city has been exemplary during the last 7 years as a secondhand car. Probably I was fortunate to get the best-built variant of the Honda City

Honestly, I never thought I will keep Honda city for that long and that too a pre-owned.

For a new car, my preference was a diesel engine, although I was open to Petrol also. The main reason is the fact that I wanted to use a diesel car before the next purchase, which is likely to be an EV and I have already owned 2 petrol Cars in the past. so despite DPF issues, I thought I will take a chance.

One Caveat – As you will see below. Engine + AT combo was my top preference. Hence if there was a petrol engine just like 330i in this price range, I would have gone for that instead of diesel (Wishful thinking)

The most important factors stack ranked:

ASS was also important, however, for Bangalore most of the brands would fare well. CKD build quality was also an added advantage

Following is the sequence of events

2019: I have been on the lookout for a new car since 2019. Almost finalised Seltos, but then backed out for wanting a better car. Then came Covid and the car search was paused.

2020: Waited for Tucson facelift. Test drove. But somehow could not go ahead with the booking due to the dated interiors

2021: Jeep compass was a strong contender post-AT launch. But again, somehow could not get over mediocre space and Engine + AT combo performance. Otherwise, it was quite good. Eventually, the only reason why I did not end up with Jeep was the space offered for the asking price (Diesel AT Tope end)

2022: Was still waiting for the perfect car. I was in touch with Hyundai for the new Tucson launch. Meridian was also a strong contender, but again, the 8L price difference between the compass and the same engine + gearbox combo made me hesitant. Also waited for Kodiaq and Tiguan. But none got through the final shortlist. Had it been Kodiaq Diesel, it would have been my top choice

25th July: Got a call from Mahindra that AXL AWD AT Blue is ready for allocation. But I wanted to wait for Tucson’s price announcement and told them that I will wait for the next allocation.

2nd Aug: Mail sent to Mahindra on confirmation of the next allocation. All this happened assuming that the new Tucson will be 4-5L more expensive than XUV700 AXL AT AWD variant. But I was wrong!!

10th Aug: Price announcement and I was in two minds again. Called Mahindra once to see if the allocation can be managed but received a lukewarm response as the car was already allotted to someone else

16th Aug: Took comprehensive test drive of Diesel AT. Was convinced about the car, space on offer, drive, NVH and ADAS features. The backseat was a delight!

18th Aug: SA called with news that white Signature AT is available. Called the Wife and she was reluctant about the white colour. So told them I will wait. I had also not made up my mind on spending 10L more than XUV by then

16th Sept: SA tells that car is likely to be billed towards month end and asked me to keep finances ready

30th Sept: SA frantically calls saying Grey colour has been billed to him and it can be allotted. But he needs full payment for confirmation. Did the paperwork finally that evening. Insurance was taken from outside.

In the meantime, got the City evaluated via Spinny. Sent Spinny’s 2nd quote to the dealer to match and finally after a lot of to and fro, he matched Spinny quote with ~8K difference on the last day (30th Sept). Why settle with an 8K difference? Purely for convenience as I had only 1 car. Spinny wanted the car immediately

Not so good – Finally made peace with pricing. All cars are expensive and there is no point to worry about it via too much comparison. In my mind, I probably paid 3-4L extra for Tucson

Good – Honda city gave me 1L extra price compared to when I evaluated it in 2019. Times have changed. Getting 1L extra after 3 years was a delight and somehow new car price seemed more reasonable post this.

Total run till now ~ 650 Kms with one Sakleshpur trip with 5 adults + 2 children + Lot of luggage. Completed many offices run via some really narrow roads. The car is an overall delight to drive.

ADAS is quite good. It is always on for me, even in the city. It keeps beeping, but I am Ok with that until the car is new. Bluelink is also activated and has tested the remote start-stop with ease.

No PPF / Ceramic Coating till now. I am not sure if I will do any of that. The only Car accessory I got from a dealer is a cleaning kit and floor mats

However, I got a 70Mai+ A5000 dashcam. I have installed the front camera myself, the rear camera is yet to be installed as I have not visited any workshop for rear camera wiring

Few Pics of PDI – It was supposed to be in the stockyard, but by the time we reached the stockyard, Car had left for the showroom. Reading on ODO = 15 Km.