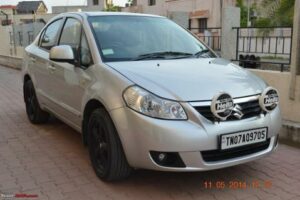 I had no hopes of getting my car fixed, but was pleasantly surprised by Maruti.

BHPian Kaumad recently shared this with other enthusiasts.

I needed to drop a friend at the BLR airport late in the evening 2 days ago and we decided to stay at a hotel near the airport after dropping him off. The next day we had planned to drive to MAA, which incidentally was the day of Ayudha Pooja.

It was a small hotel and the car park was on the road, with a security guy watching through the night. The next morning after breakfast, my wife and I get in and I crank the engine. It shudders violently, with black smoke billowing out of the exhaust. I switch it off immediately. It ran fine just yesterday evening and I am surprised at this.

I open the bonnet and I am shocked!!

There is petrol all over the engine bay like someone poured a mug of petrol all over it. Although I realise it is a fuel leak, I don’t know where the leak is, as the engine bay is drenched. I think of a small experiment. Told my wife to keep a safe distance and watch the bay to see where the fuel is leaking – told her I will turn the ignition on for a split second, without cranking. When I did that, I could see fuel gushing from the rubber pipe leading into the injector manifold. Thankfully, the problem was identified – it was the rubber fuel pipe, which meant a simple and easy 5-minute job of replacement.

Now, I had forgotten it was Ayudha Pooja and realised it only when I started contacting the nearby service centres. None of them agreed to help, citing Ayudha Pooja:

One of them suggested I call Maruti On-road Service MOS as they call it. Honestly, I had no hopes – for other daily consumer products and services [non-Maruti] how many times have we called a Toll Free 1800 number, only to get an SMS saying our complaint has been registered and then nothing happens?

So, I called Maruti MOS or RSA and explained my predicament. The lady was very patient and promised that the nearest MSIL service centre will call me in 10-15 mins. At no point did she make the excuse of Ayudha Pooja [1st pleasant surprise].

As promised, I got a call from a technician from Pratham Motors [2nd pleasant surprise]. He patiently heard my problem and asked me where I was. Told him I was near the new BLR Airport and then he told me, that MSIL MOS had told them I was near the old HAL Airport. Oops – MSIL MOS had bungled up my location. Told him to forget it as there was no point in him travelling for 2 hours for a 5 mins job.

Called MSIL MOS again and told them to rectify the location. I emphasised that I was near the new Airport and not the old one!!

As expected, I got a call from Bimal Auto Yelahanka. The guy heard me and told me it was a holiday and all service centres are closed. I requested him to help and he agreed to come [3rd pleasant surprise]. He asked to share some photos so he could get the right part, which I did. 4th and most pleasant surprise – was he was at my location in 30 minutes, along with his mechanic. Replaced the rubber hose in 5 minutes and I was good to go. Rs. 1,200 including part and RSA cost!! I was really glad they came on holiday to help and I gave them Rs. 2,000.

This is why MSIL is #1 in Customer Service. Bear in mind, this was on Ayudha Pooja when none of the tools/equipment/vehicles are supposed to be put to use. MSIL still made an exception and attended to a customer request, which by all means was a small 5-minute job, which they could have very easily ignored and/or refused.

Here’s what BHPian Nissan1180 had to say on the matter:

Thanks for sharing this experience. Maruti engages a well-trained customer care team. They listen, respond and arrive, unlike most other companies which do not take help calls seriously. Once I was stuck on the side of the road because my under-warranty Tata Nano had a malfunctioning driveshaft. The Tata helpline told me that the car can only be picked up after 48 hours in an area around Kolkata. In another incident, our Baleno sedan had an electrical issue one morning, and the Maruti team arrived on the same weekday morning within an appreciable time, even for a long discontinued car with rare parts. That gives a picture of the dedication of the Maruti customer service team.

Here’s what BHPian Amey Kulkarni had to say on the matter:

Kudos to MSIL for keeping up this Client Servicing a priority. I still recall and cannot forget the feedback I gave to the ASC after one of the regular maintenance services on my Ex- Ertiga which was basically an average score for the car wash as the alloys weren’t cleaned properly.

The MSIL guys called me multiple times and informed me that I can take the car for the wash whenever I’m near their ASC. I rejected their offer stating why should I waste my time and they still pushed me and said, no worries, we will pick up the car and drop it back if you’re busy Sir.

Simple feedback on the Car Wash and this kind of humble service were overwhelming.

You can bash MSIL all you want, but a reality check for the sour grapes is that MSIL has The Best Client Servicing. Period!

Here’s what BHPian Dr.AD had to say on the matter:

Thanks for sharing your experience. You did not mention which car it was (or did I miss it?), but from your signature, I assume it was an SX4.

I have had a similar experience of great RSA and emergency service from Maruti on my SX4, and I truly agree with your thoughts and appreciation.

I have explained that incident in detail here.

In summary, on my car which was more than 10 years and 120,000km old at that time (till then I had an absolutely reliable experience), while driving the car normally one fine morning, the AC compressor belt snapped and I had to pull overhearing loud hitting noises from inside the engine bay. The noises were followed by a strong burning smell. I called the Maruti service centres I could find on my phone. They redirected me to the nearest one, and a mechanic came to my spot in exactly 30 minutes as promised, immediately and correctly diagnosed the real issue, did a temporary fix, drove my car to the service centre, and there, they replaced the broken belt with a new belt in quick time. And the bill for all of that, including the RSA and the cost of the new belt, was around Rs. 1300! And all this with a polite, patient attitude and a smile on their face!

Having experienced many service centres, on many incidences, on different brands of cars, I genuinely believe Maruti’s service is absolutely the best and there is a reason why they are regarded as #1 in customer service. The peace of mind I get when I drive my old and ageing SX4, now with more than 130,000km on the odo, is invaluable, and my faith in Maruti service is a huge contributor to that peace!

Here’s what BHPian aargee had to say on the matter:

This is also the reason why we opted for ASC to be a top priority over anything when buying a car. ASC was the reason we had to opt for SCross over Creta, Ecosport & even a used X1!!

Even if one MSIL or Nexa ASC does not provide a satisfactory service, we’re not at their mercy nor do we’ve to travel 100s of Km to find another ASC. There’s a plethora of ASC scattered, not just within the city, but over the entire country. When I broke the oil sump at Chainigothi (nr Gangotri) accidentally, our trip was delayed only by a day without having to cause any major inconvenience; right from towing to finding the parts to fixing it & claiming insurance, everything was handled satisfactorily by DD Motors.

Even today we get a call from Seva Automotive, Nasik, for once we splinted the bed bolt due to the umpteen number of rumbler strips in MH. They worked on my car on priority considering we had to leave the next day.

Leaving with the most-apt MSIL advertisement that stands true to this day.