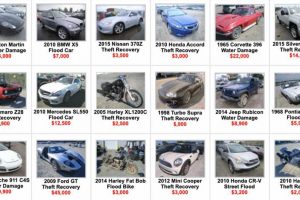 The website readytofix.com claims to offer access to more than 15,000 salvage cars ready to be rebuilt, being sold at deep discounts. “Oh dope, this sounds awesome,” I thought. But it barely took any investigation to figure out it’s a scam.

Car Bibles is a new sister site to The Drive focusing on DIY culture, pro tips for maintenance and modifications, and fun takes on the car scene. Click here to check it out! 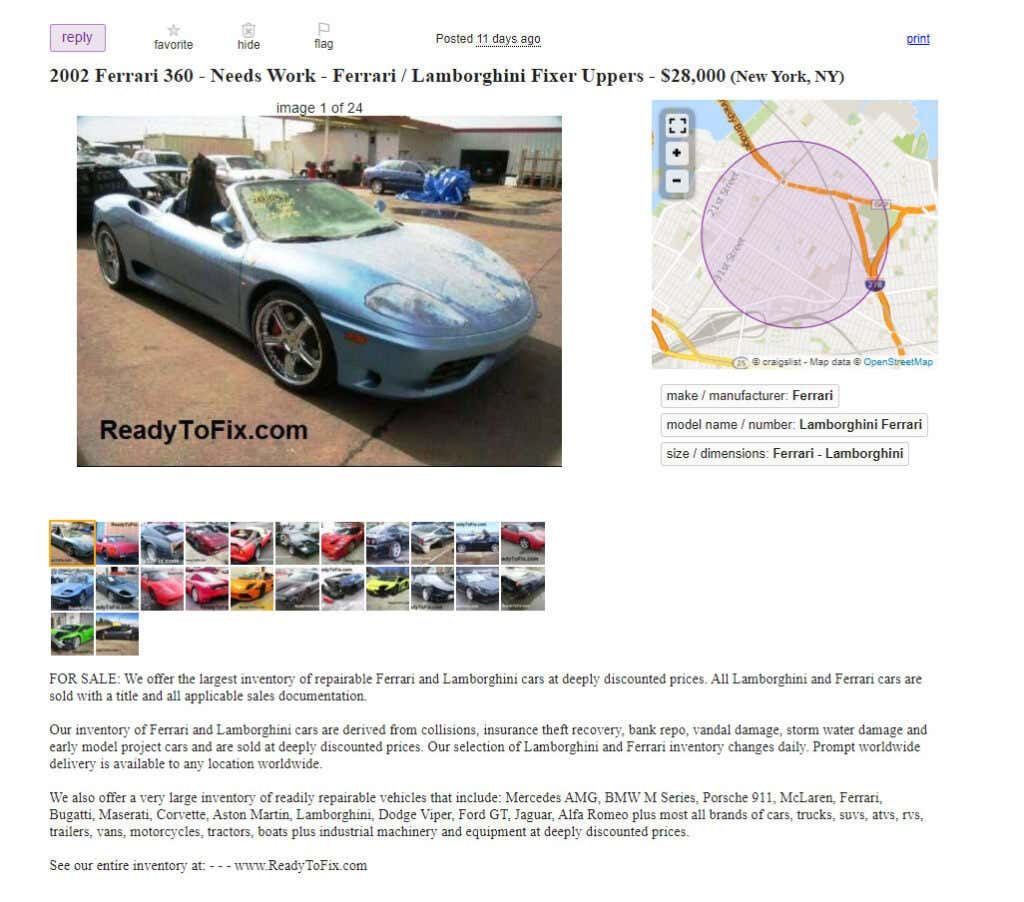 Like any car-related workplace, most of us here at The Drive and Car Bibles are continually buzzing about whatever next automotive move we’re gonna make. I, personally, am tired of my Chevy Sonic, and I’ve been toying with dumping it soon. Our workroom chats are full of coworkers posting about good deals, or cool sites that we come across in the weird online classified ad realm.

For example, whilst searching for an Alfa Spyder, the famed Patrick George came across the Craigslist above…

The ad felt off, though. The pictures in the ad were weirdly low-quality. We live in 2021, and nearly everyone has a smartphone that takes damn good photos, there should be no reason why I’m viewing pixilated images of a Lamborghini for sale. Even a junky, salvage-titled “fixer-upper.” The ad’s copy was full of model names, brands, and keywords, so it would show up in more search results. As you can see, the listing advertised a wrecked 2002 Ferrari 360 for sale, but the copy in the ad didn’t mention any specifics about that car. Somebody was shilling a website, not a car.

I ventured to the website, and what a shocker, it was pretty shady looking too. The site looked like it’d been created from a Yahoo Geocities template in 2002. Sorry, I shouldn’t be so harsh. I’m sure this website did look impressive, on an iMac DV using Netscape Navigator. Anyway, the photos again were all poor—they were objectively bad pictures (not uncommon in car listings) but also disconcertingly low-resolution. They even got some of the cars wrong; a 1995 NSX was clearly from the 2000s, for example, as it didn’t have pop-up headlights.

Both the website and the ad described the outfit itself as “the largest source of repairable salvage cars,” yet I’d never heard of them. “How can they claim to be bigger than a national chain like Copart,” I wondered, still thinking the site might be real. Popular YouTubers like Rich Rebuilds and Samcrac use Copart heavily as fodder for their projects. With their millions of views and subscribers, you’d think the name “Readytofix” would come up somewhere in their videos, no?

The more I looked, the weirder it got. The “frequently asked questions” section said that there was no license needed to buy these vehicles. Odd. At Copart (and all legit salvage auctions, really) regulations vary from state to state. In my state of Ohio, Copart has restrictions on what kind of vehicles can be sold without a dealership license or business license. The fact that Readytofix made no mention of these restrictions gave me great pause. And yet again, more than half of the questions not-so-subtly insisted on you registering to access the site’s list of inventory.

Weirdest of all, a “sample database” included a listing for a wrecked Lamborghini Murciélago allegedly for sale that day. A simple Google search of the VIN took me to a forum post from 2011 where someone was inquiring about the same car, from the same site.

I dug a little deeper—The Wayback Machine showed me the site was completely the same in 2016, even down to the number of vehicles in inventory. Another Google search brought up complaints of people paying the $25 registration fee, and only getting a list of other sites that were often free to register to and view salvage auctions… established places like Copart.

Bizarrely that Murciélago’s VIN also brought me to another nearly identical site, repairablecars-forsale.com. The format was rejiggered a bit, but the cars advertised were the same. The copy was mostly the same too, save for one thing—the About Us section had the name of a company: Titian AKT Salvage Alliance. This company also even claimed to be established in 1976!

Searching the company brought me to a Better Business Bureau listing, which showed it was based in Tulsa, Oklahoma. The company had a B- rating, but the BBB website also said it was not an accredited business. In the complaints section, two people claimed to have paid out money to access information that they never got. Others complained that they got access to a basic list of websites, but also had their email filled up with junk that had nothing to do with buying a salvage car.

I’ve found at least two more sites that were nearly identical to the other two. Same cars for sale, same vague copy. In some spots, even the wording was the same. This scam seems like it’s been running since at least the early 2000s, judging from the forum posts and questions all over car internet.

There are some anecdotal reports on forums that seem to indicate some cars at some point did change hands through this site, but based on the overwhelming evidence that it’s sketch city, we’re officially advising you to stay the heck away. Googling will turn up plenty of posts like this:

Sure $25 may not sound like a lot of money to get swindled out of, and for most people, it isn’t. The real danger is that you don’t know where your credit card information is going. On all of the sites I found like this, the online credit card registration didn’t have any secure encryption (often signified by a lock icon on your web browser). Your information could go anywhere and potentially be used nefariously. Never fun to deal with an identity thief when you’re just trying to get a good deal on a broken supercar!

I tried contacting Readytofix myself, via the email on their “Contact us” page. It bounced back; the address was invalid. There’s no phone number listed. Now I wonder, who is posting fake Craigslist ads to the site? Who is collecting the $25 fees? Whoever they are, they probably aren’t people you want to try and buy cars from.

When you’re searching for salvage vehicles to buy, here are some red flags to watch for:

If that all seems obvious to you, great! But some people are still getting tricked by these bogus ads, otherwise nobody would bother refreshing the Craigslist postings or maintaining the domains. Keep your eyes open, trust your instincts, and share this article with anyone who might otherwise be tempted by cheap-looking Lamborghinis!

And of course, if you’ve had experience with scams like this yourself, by all means tell us about it in the comment section.

Kevin Williams is a writer at Car Bibles, a new sister site to The Drive focusing on practical tips and DIY advice to help you get the most out of your car. Come see the freshly redesigned Car Bibles right now! Or check us out on Twitter, IG, and Facebook. Actually LinkedIn too, if you’re on there.