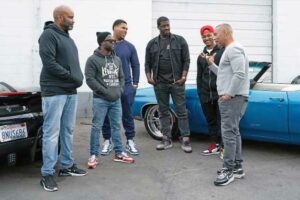 Getting older and growing apart from your friends is a sad fact of life. Kevin Hart and the Plastic Cup Boyz—John “Burgandee” Clausell, Ron “Boss” Everline, Will “Spank” Horton, Harry Ratchford, and Joey Wells—are lifelong friends and will do anything they can to stay close with one another, but careers, family, and life in general often find a way of foiling those plans. The Plastic Cup Boyz aren’t going to let that happen, and it was their shared love of cool cars and a desire to keep the group tight that started Kevin Hart’s Muscle Car Crew.

A couple years ago, Kevin Hart bought each of the guys their dream classic car, and now they want to get serious about car culture. But where do they fit in and what are they all about? They’ve got such a disparate group of cars and opinions about what’s cool and how to build a car, they don’t know where to begin.

Related: The MotorTrend App is the only place to watch as Kevin Hart’s Muscle Car Crew learns what it takes to set up a serious car club. Sign up today for a free trial!

It doesn’t help that, even though they can recognize cool, they don’t really know that much about cars. But the Plastic Cup Boyz aren’t afraid of admitting that; they’re eager to learn more and to be taken seriously as collectors and a car club, and they’re happy to bust each other’s chops along the way.

The whole point of a car club is getting the rides together to show off and brag. Car people can’t help but gab about their vehicles, especially when they gather en masse at car shows and cruises, like the Quarantine Cruise in Huntington Beach, California. There’s no better place for budding enthusiasts to dip their toes in the vast waters of car culture and meet like-minded people who are more than happy to share everything they know.

The Plastic Cup Boyz brought all their cars to the show, and it quickly became apparent that they had no idea what they were looking at when checking out the other cruisers’ cars. Shock towers, twin-turbos, MSD EFI? It’s a foreign language the guys don’t understand—yet—but they’re working on that.

The Plastic Cup Boyz also decided that four of the six cars in the crew just aren’t up to snuff. Joey’s ’56 VW Beetle and Boss’s ’65 Mustang both suffer from reliability and driveability issues. Spank loves the 396 big-block in his ’69 SS Chevelle, but it doesn’t have the power to get out of its own way. John thinks he’s the fastest in the crew, and if Spank is getting more power, he should too, so expect to see something change on his 1968 Chevy Camaro SS.

How to Choose a Car Builder

If you’re like Kevin Hart—a global megastar leading multiple blockbuster movies every year on top of all kinds of other gigs—dropping, say $1,000,000, on a state-of-the-art custom car put together by a world-renowned builder is totally reasonable. Joey doesn’t want to spend anywhere near that kind of money on his ’56 Beetle (would that even be possible?) and Harry’s already dropped six-figures in his ’70 Chevelle, which was a hard pill to swallow.

Anyone who’s ever gone down the rabbit hole of customizing a car knows how quickly the finances can get out of hand if one gets too excited. Finding a builder that knows how to work on the car you own and can give you quality work at a reasonable price in a reasonable amount of time isn’t easy. The guys split up in an effort to find a shop that could suit all of their build and budget needs, but the search came up empty.

That’s where Lucky Costa of HOT ROD Garage comes in. Before starring on the MotorTrend App, Lucky has been a mobile repair technician and car electrician for decades as well as being a behind-the-scenes builder on Overhaulin’. Lucky also owns a shop where he’s always got something going on, like an LT4-swap in Dax Shepard’s 1988 Chevy 454 SS Pickup. Lucky loves anything American and pre-emissions, but he’s seen and worked on it all, especially vintage Volkswagens.

A car built by Lucky Costa isn’t some back-alley deal or multi-year, multi-hundred-thousand-dollar relationship. He builds cars to be reliable and fun at any price point. Sounds like a match made in heaven for the Plastic Cup Boyz, but there’s only one place to follow the crew on their classic car culture education: the MotorTrend App. Sign up for a free trial, and start streaming today!