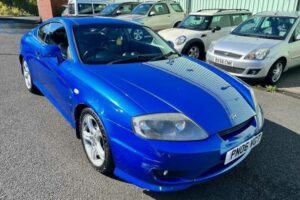 Shed has gone on his holidays this week. He always stays in the same converted stable that he picked up for a song a few years back. He thought it would make him a small fortune in rental income, but two things spoiled it: Covid, and the fact that nobody knows where Silesia is.

Anyway, it’s an ill wind that blows nobody any good. Thanks to the complete absence of renters, Shed can go to his bolthole any time he likes. The main problem is that there is only half a megabyte of internet at any given moment out there and as such Shed has had to rely on a combination of instinct and his sense of smell to pick out this week’s sub-£1,500 selection.

What he’s come up with is a late phase 1 example of the gen-two Hyundai Coupe which ran from 2002 to 2007 or thereabouts. Two versions of the Coupe were sold in the UK, a 2.0-litre four and this, the somewhat rarer 2.7-litre V6. Being honest, the Hyundai Coupe wasn’t the most satisfying car of its type to drive, or the roomiest (although the boot was surprisingly big) but what it did have going for it was its styling. In most of the big markets outside Europe they called it the Tiburon, which is Spanish for shark. In Korea it was known as the Turbulence.

The UK importers must have been strongly tempted to call it the Flatulence because neither of the engines were high achievers. The 2.0 had around 135hp and the 2.7 only had 165hp, which was a long way behind the 240hp that the 2.7-litre six in Porsche’s Boxster was putting out at that time. With over 1,400kg to move, the V6’s 181lb ft still managed to get the six-speed manual Coupe through the 0-60 in under eight seconds en route to a top speed of 135mph. This one is a conventional auto, though, which is less than optimal from a performance perspective but at least it gets you round problems you might have had with the manual box’s sometimes quirky clutch.

The Hyundai V6 engine is kind of like the one in the 2.5-litre V6 Mondeo. Press the throttle and you’ll get more noise but not much more performance. A basic chip tune-up on the V6 would liberate an extra 15-20hp and around 20lb ft, but the absence of a turbo made it hard to get big, cheap improvements. The under-stressed nature of the engine should have meant decent longevity although in reality the V6 did acquire a bit of a reputation for bottom end trouble. Having said that, it could be made to sound pretty good with a new exhaust and sportlicher air filter.

Our Shed has done 98,000 miles all told, and getting on for 10,000 of those have been racked up since the last MOT in January, which if nothing else tells you that it’s as mobile as you’d hope a car to be. That last test picked up some front inner tyre wear, some play in a front wheel bearing, and a small exhaust blow. They were the advisories left on the ticket after an initial fail due to wafer-thin brake pads, a fritzing EML, and what was described as an excessively damaged anti-lock braking component, all of which were presumably rectified.

There seems to be some suspect bodywork above the offside rear wheel which ties in with the model’s propensity for arch and door edge rust. Shed also remembers these Coupes having a bit of bother with their UK-installed alarm systems. He’s no believer in alarms generally. His strong sense of self-preservation means that he would never race over to apprehend anyone who had triggered an alarm on somebody else’s car. Life’s too short. By the same token he wouldn’t expect anyone to intervene in the theft of his own car. Obviously, it helps that nobody in their right mind would want to be seen dead in any vehicle owned by Shed, but that’s not the point is it?

Trade prices for V6 Coupes of this age range from £1,350 to £2,300, so technically at least this one is at the cheap end of the scale. The reality of buying something like this is that you’d really need to be in love with the shape to accept old-school fuel consumption figures like 27mpg. In mixed use you’d have to steel yourself for something in the low twenties or even worse. It all sounds slightly depressing, but it could be worse: you could be holed up with Shed in Sliesia wondering when the next horse and cart might be coming through.