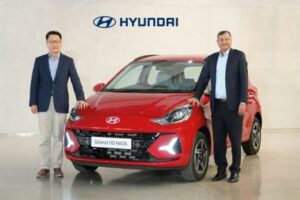 The Grand i10 NIOS is available in four variants – Era, Magna, Sportz and Asta. It competes with the likes of Maruti Suzuki Swift and Tata Tiago.

Hyundai has announced the launch of the Grand i10 NIOS facelift in India. The updated hatchback is available in four variants: Era, Magna, Sportz and Asta, priced from Rs 5.69 lakh (ex-showroom).

The Grand i10 NIOS facelift receives a redesigned front grille and bumpers as well as Y-shaped LED daytime running lights. The car also gets a reworked rear end featuring new wraparound taillights and what appears to be a reflective strip in the centre. It rides on new 15-inch dual-tone alloy wheels.

Inside, the Grand i10 NIOS comes equipped with an 8-inch touchscreen infotainment system with Apple CarPlay and Android Auto, a wireless charger, automatic climate control, cruise control and voice recognition.

Mechanically, the updated Grand i10 NIOS is identical to the outgoing version. It is available with a 1.2-litre petrol engine that makes 82 BHP and 114 Nm. The engine is paired with either a 5-speed manual or a 5-speed AMT. The car is also available with a factory-fitted CNG kit.

The hatchback gets a wide range of safety features too. It is loaded with 6 airbags, TPMS, ESC, VSM, hill assist control, automatic headlamps and ABS with EBD, among others.