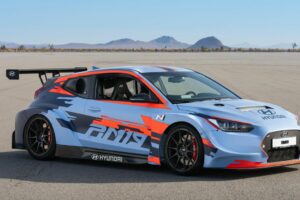 The Hyundai i30 N came out of nowhere and, despite being the brand’s first real hot hatch (sit down, i30 Turbo), it quickly became one of our favourite affordable fast cars. But it wasn’t always the car that was intended to launch the N sub-brand.

Albert Biermann, the former head of BMW’s M division, was brought in by Hyundai to oversee its new performance models. Eyebrows were raised. But in a recent interview with Top Gear, Biermann revealed that Hyundai was even more ambitious than it initially appeared.

“We were working on an N supercar”, Biermann said. The supercar was reportedly going to be mid-engined with a carbon-fibre tub chassis, like a McLaren. “We had plans for a petrol with or without hybrid, or a hydrogen fuel cell”.

The unnamed model was known internally as “the Chairman’s Car”. Biermann was asked whether it’d be a rival to the Honda NSX, to which he replied “sure, but not boring”. Ooh, the shade.

Hyundai did reveal the RM19 concept in 2019, a year or two after the i30 N launched. The RM19 (pictured) looks like a Veloster racing car and seems to share the underpinnings of the supercar concept. It had a 2.0-litre turbo petrol with hybrid assistance mounted mid-ship. As a touring car, it pumped out 385bhp and hit 0-62mph in under four seconds.

Ultimately, Hyundai’s board decided that the mid-engined supercar would look out of place alongside i10s and Tucsons, especially with its projected $150,000 (£135,000) price. Realistically, the affordable i30 N was a better starting point, and one that’s gone on to spawn the brilliant i20 N and the hairy-chested Kona N.

But the reaction to Hyundai’s recent N Vision 74 concept suggested that a pricey, sporty model would be accepted by enthusiasts. Maybe this isn’t the last we’ve heard of a Hyundai supercar.