Home » News & Features » Hyundai Will Launch a RoboShuttle Next Month

Hyundai Will Launch a RoboShuttle Next Month 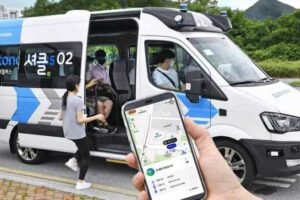 Hyundai is among several automakers and developers working on high levels of autonomous driving, and in just a couple of weeks it will introduce an on-demand “RoboShuttle” service in South Korea. Designed to run along a 6.1-kilometer, 20-stop route around Sejong Smart City, the RoboShuttle will use a number of Level 4-comparable core technologies, as Hyundai calls them, developed by the automaker’s Autonomous Driving Center. For the time being the RoboShuttle, based on the Hyundai H350 passenger van, will operate on a temporary Level 3 permit from the South Korean Ministry of Land, Infrastructure, and Transport.

The planned RoboShuttle will also bring something else into the mix: an app-based ride-pooling service launched in South Korea called Shucle, combining the words “Shuttle” and “Circle,” that will allow the vehicle to only make stops at pick-up and drop-off points if requested by passengers.

“The RoboShuttle service will connect the company’s proprietary autonomous driving technology with AIRS Company’s AI mobility technology,” Hyundai says. “When a RoboShuttle is requested by a passenger via the Shucle app, the self-driving shuttle will head to the pick-up point by calculating the best path using AI algorithms.”

The modified Hyundai H350 van itself uses cameras, radar, and Lidar to paint a picture of its surroundings, but it will still have a safety driver behind the wheel for the time being. The near-term goal of such shuttle-based, geofenced vehicles is driverless Level 4 autonomy, allowing them to operate along a closed loop without a person behind the wheel. Hyundai is among several automakers and autonomous developers currently testing such systems, in combination with an app that allows passengers to request pick-ups and drop-offs.

“Shucle is the first ride-pooling service to be launched in South Korea offering shared mobility solutions to passengers with similar routes by using algorithms to determine the optimal route based on demand,” the automaker notes.

Even though route-based shuttles in university and tech-hub environments are the perfect testing environment for Level 4 tech, the ultimate goal of such efforts is to allow driverless robotaxis to operate in more open but still geofenced environments, with paying customers inside. At the moment, fielding this type of Level 4 technology is seen by a number of developers and automakers as the next big step in autonomy—Volkswagen announced earlier this week that it plans to own and operate autonomous shuttle fleets in the somewhat distant future, and we’ve already been in just such a prototype a few years ago at VW’s proving grounds. A number of other developers expect a much earlier timeline for the roll-out of such paid services.

Inevitably, that’s what it all boils down to: making Level 4 autonomy less expensive than paying a person to drive the shuttle bus, along with some safety gains if they can be achieved.

As a number of developers and automakers working on autonomous tech have realized in the past few years, high levels of automation will be solved in some distant future, but whether they will be cost competitive with human drivers doing the same thing may prove to be a more difficult challenge than achieving reliable Level 4 autonomy.

Do you think robotaxis will arrive on the market in a meaningful way in US cities in this decade, or is this tech still further out? Let us know in the comments below.