Home » Involved in road accident | FIR vs Outside settlement

Involved in road accident | FIR vs Outside settlement 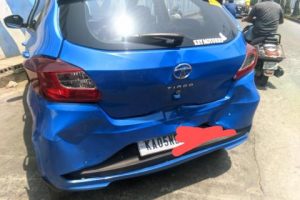 Little did I know, sometimes you just can’t do anything.

BHPian toroid recently shared this with other BHPians.

I’m the guy who posted this.

I got some invaluable advice from the Team-BHP community. Even my fiance was impressed by the overall response and how helpful this community is. So much so that she started following the forum and subscribed to newsletter, although she’s least interested in cars. Practicing defensive driving being the top recommendation, hence that’s what I decided to do. Little did I know, sometimes you just can’t do anything.

This is what happened to my 2 month old car yesterday: This is how it happened

A part of me tells me, if I were not practicing defensive driving, I would’ve overtook the car in front of me and avoided this entire episode.

At 1 PM yesterday, we decided to go out for our Ooty trip planned for the next day. Less than 3 km away from my house, an Indica came and banged my car from behind. At the time of impact, I was driving at ~20km/hr and slowing down, just after the impact, my speed went upto ~55km/hr. Fortunately, everyone was buckled-up in my car and no one got hurt.

The driver took complete responsibility as he was trying to operate his phone while driving. However he had no guilt. If it had been a 2-wheeler instead of a car, this could’ve caused serious injury. I ensured the passenger who was traveling in the cab gets the necessary assistance.

I took photos of his license and the incident. Asked for his insurance copy, he did not have it. I contacted my insurance company, got the car towed to the service center. Reached out to my SA and sent him some pictures for a rough quote, he quoted minimum 85K. Some of it might go from my pocket. By the time the towing truck reached us, we contacted the owner of the cab to settle this outside police station, to which he was somewhat apathetic, arrogant and argued, 5k is the maximum that he can offer and not a single penny above it. He said that, if I go to the police, they’ll end up paying a maximum 2k penalty. I asked him to just pay for the repairing amount not covered by my insurance, to which he bluntly denied.

Till this point I was calm but this tone was very discouraging for a settlement:

I pursued him to pay more, and after what seemed like 10-15 mins I ended up deciding to go to the police. At this moment, it was less about money. I did not care if I lose some money but just wanted to attempt getting justice through our legal system (deep down I knew I’m setting-up myself for big disappointment).

We went to police station and police tried their best to avoid filing a FIR. I was told/discouraged,

“If you file a FIR the driver will get away with maximum 1k penalty. It’s better you settle outside.”

“If you file a FIR, your insurance company will not approve the claim unless case is settled in court. Which could take more than 2 years.”

Didn’t know what all to believe, so I took a leap of faith and went ahead with the FIR. My car was not getting locked still and I had to leave it at the police station. If the above statements are true, I’ll be disheartened and would find one of the reasons behind the absolute chaos that our roads are. As long as you don’t hurt someone, you can just get away with 5k outside settlement. If victim decides to go to the court, you’ll have to pay only 1-2k penalty.

Though I have taken actions, I would definitely be benefited with experienced opinions on handling such situations!

Thanks to toroid again. Check out BHPian comments for more insights and information.