Home » News & Features » Is Bruce Wayne Set to Drive the Vision Mercedes-Maybach 6 Cabriolet in "The Flash"?

Is Bruce Wayne Set to Drive the Vision Mercedes-Maybach 6 Cabriolet in "The Flash"? 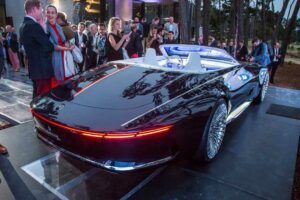 Michael Keaton is set to reprise his role as Bruce Wayne (and presumably Batman) in the upcoming film The Flash. Whether the Caped Crusader’s famous Batmobile from the 1989 and 1992 movies Batman and Batman Returns makes a cameo in the forthcoming superhero flick remains under wraps.

That said, it seems as though Keaton’s Bruce Wayne will tool about in an extraordinary vehicle of his own: the Vision Mercedes-Maybach 6 Cabriolet concept car the German automaker revealed during Monterey Car Week in 2017. At least that’s what film buff Grace Randolph claims. Randolph tweeted out images of Keaton filming on The Flash set, including an image of the massive Mercedes convertible (presumably wearing a detachable hardtop). “This is [Keaton’s] car”, she tweeted.

Does the appearance of the Vision Mercedes-Maybach 6 Cabriolet in The Flash imply the three-pointed star has plans to mass-produce this big beast (mass being a relative term given the potential production car’s surely six-figure price tag will result in limited sales)? We don’t know, but we hope so. We presume a production version of the 6 will at least offer an electric powertrain as an option. Mercedes previewed such a powertrain on the concept, which purportedly produced 750 hp and offered a driving range of more than 200 miles on a full charge of the battery pack.

That said, we’re not going to get too worked up over the Vision Mercedes-Maybach 6 Cabriolet’s appearance in The Flash. After all, Acura placed an NSX convertible-like concept car in the 2012 superhero film, The Avengers, and nearly a decade later, the brand’s yet to introduce a drop-top model, let alone an open-roofed NSX.