Home » News & Features » Is There Anything To Like About The BMW XM?

Is There Anything To Like About The BMW XM? 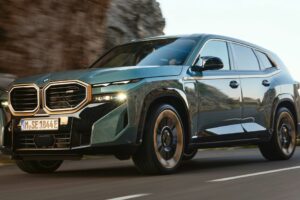 You knew it was coming, and here it is. The production version of the BMW XM has been revealed, and it could be the antithesis of everything the M division has crafted up until now. Forget lithe coupes and thumping V8 saloons; the XM is an SUV with a plug-in hybrid powertrain. Considering this is BMW’s first electrified full-fat M model, you’d think the brand would want to set out a stall to tempt enthusiasts towards PHEV and EV power, but the XM looks to be the product of a very different business plan.

We know your thoughts about BMW’s current design – the iX and the XM make the new M2 look good – but the XM is somehow even more gaudy than the original concept suggested. The odd gold trim that peels away from the windowline and the twice-ringed grilles just scream of needy attention seeking. The tailgate is weirdly blank apart from an ‘X///M’ badge that, and there’s no way to explain this succinctly, looks like it doesn’t belong there. Like the SUV’s been upbadged.

The BMW XM is set to be a standalone flagship model in BMW M’s car lineup. The Bavarian super SUV will be propelled by a hybrid power plant, mating a 4.4-litre twin-turbo V8 engine with a 25kWh battery and an electric motor to produce 644bhp. Power will be delivered to all four wheels via an eight-speed automatic transmission.

But because it weighs 2.7 tonnes – near enough twice the weight of an E46 M3 – it’s not even that fast by modern standards. 0-62mph takes 4.3 seconds, so it’ll be blown out of the water by smug Tesla SUV drivers. Top speed stands at a limited 155mph, or 168mph if you choose the optimistically named M Driver’s Package. BMW is already working on a ‘Label Red’ version of the XM that’s set to pack 748bhp, so at least that should offer competitive acceleration.

Officially, the XM can drive up to 55 miles on electric power with a fully charged battery, and the UK fuel economy figure is 188mpg. Cooool. As per many PHEVs, the XM has a range of drive modes that let you flick between EV, V8 and both. There’s also a Comfort mode, which might suggest the demographic that the BMW XM seems to be aimed at.

Next up, check out The New BMW M4 CSL Is A 542bhp Racing Machine With Flared Nostrils