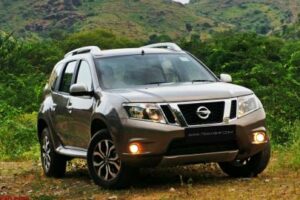 Every time we raised a concern at the service centre, we were told that this is normal for the Nissan Terrano & Renault Duster SUVs.

BHPian Akash_1806 recently shared this with other enthusiasts.

I am having a weird issue with my daily workhorse, a 2014 Nissan Terrano XLD 85 which has now completed nearly 1,24,000 kms driven by me and my dad only.

I remember, right from the 10k kms service, my dad had complained about a hard shifting of gears to the service advisor at Neo Nissan, Sector-3, Noida but each and every time we only used to get one response that is, it is normal for Terranos and Dusters. None of our complaints against this was acknowledged by them and it is still the case now.

For the past month, I have been facing an issue with the clutch and gears. If I drive in bumper-to-bumper traffic for more than 10 mins, the clutch pedal depresses and the gears refuse to shift. Mentioned this to the service centre in the 120k kms service and without inspection, they said the clutch and pressure plates along with the master and slave cylinders need to be replaced. The estimate given is something around Rs 45,000. Got this inspected with a trusted FNG and the mech opened up the clutch and said only the cylinders need to be replaced. Also, he told us that the clutch is good for at least another 25k km.

My dad was not quite satisfied with the different findings so he got it checked at his trusted mech and he said only the slave cylinder needs to be replaced.

I am in serious doubt about what the real problem is and if this problem was mentioned to the ASC in each and every service then why didn’t they look into the matter there and then?

Would request the experts to help me with what should be done next, should I get the whole clutch work done from either ASC/FNG, should get both the cylinders replaced or only replacing the slave cylinder will solve this issue.

Here’s what BHPian Kosfactor had to say about the matter:

The concentric slave cylinders usually don’t last this long, but they have in your case. Anyhow the ASCs will now remove most of the front suspension and lower the gearbox only to replace a slave cylinder, it won’t work for them.

So they would rather overhaul the entire clutch system and then the customer also won’t bother them again for the next 3-4 years at least.

You could just fix whatever is broken or you can have a new car-like feeling clutch by overhauling the entire thing.

Here’s what BHPian r24x7 had to say about the matter:

We had an issue with our Lodgy 110. After 88K KMs on the ODO, we observed a similar issue where the clutch wouldn’t get depressed sometimes.

While I am not sure what they diagnosed the root cause to be, we were convinced that replacement of slave and master cylinder is laborious enough to have clutch plate replacement also included.

Went ahead with replacement of all three parts: both cylinders and clutch assembly for a final bill of 25K.

PS – Entire work was carried out at Renault ASC

Here’s what BHPian dhanushs had to say about the matter:

The slave cylinder failure could have happened because of the pressure plate getting hard.

Anyhow, if you plan to use the car for a long time, I’d suggest you replace the full assy.

If you have never done a clutch replacement then 1.24 lakh kms on factory fit clutch plates means the clutch would be at the end of its life if you drive in bumper to bumper and stop and go traffic predominantly.

Your father’s left knee and ankle are far more valuable than 45K rupees. I know how frustrating and hurting it is to drive a car with a hard clutch, especially in stop-and-go traffic which needs frequent gear shifts.

If you know a competent FNG garage, order the OEM parts on boodmo and get it fitted from them.