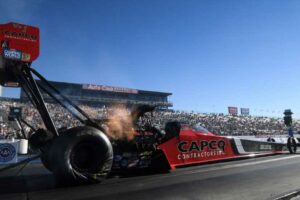 With their dominating performances and streaks in the NHRA’s Top Fuel class, newly crowned four-time champion Steve Torrence and Tony Schumacher have been compared. When Torrence early Sunday became the seventh driver in the sport’s 70-year history to record four consecutive championships and later in the afternoon claimed his 11thvictory this season, he invited more comparisons.

Torrence is the first in 13 years, since Schumacher in 2008, to win at least half the races on the schedule. During Schumacher’s run of six straight titles, he won 77.6 percent of his individual races (312-90). Torrence has won 81.7 percent of the time in the past five years (263-59). Torrence, a 51-time winner, joins Schumacher, the class all-time leader with 85 trophies and eight championships, on the title-streak list along with Don Prudhomme, Kenny Bernstein, Lee Shepherd, Bob Glidden, and John Force.

Schumacher is returning to full-time action in 2022. And although the two have recognized they aren’t the only ones in the sport’s headliner class, they’re eager to go head-to-head. Moreover, they want to beat up on Tony Stewart Racing’s Leah Pruett, new privateer Antron Brown, 2021 rookie sensation Josh Hart, young gun Justin Ashley, and . . . well, everybody else.

But Torrence, with a sly grin, had a message Sunday for Schumacher.

“Everybody that knows Tony Schumacher – and Tony’s a good friend of mine – knows he has a really big ego, and he doesn’t like it when you kind of trash-talk him. He said something about it’s not a comeback because he’s been here before. But I’m going to tell him, ‘You left, and I’m the sheriff now.’”

But he’s aware that victories and championships don’t come easy at all in what he calls a ‘What have you done for me lately?’ sport. But he figured that he and his Capco Contractors team likely have inspired independent racers with their accomplishments.

With seven-month-old daughter Haven Charli now in his winners-circle pictures, his perspective has changed a bit: “All this is important, but being a dad is more important than anything else.”

He said, “It doesn’t change you so much as what you want to do, your drive. It just changes the importance of it. Everybody has seen me go out here and make a fool out of myself multiple times, and it’s something I don’t want her to see. I don’t want to be that guy. And I’ve done my best to change that,” he said. “This is a high-intensity, emotion-driven sport. You let the emotions get the better of you and people will let you remember it always. I’ve done all I can to overcome it, and that’s all I can do. 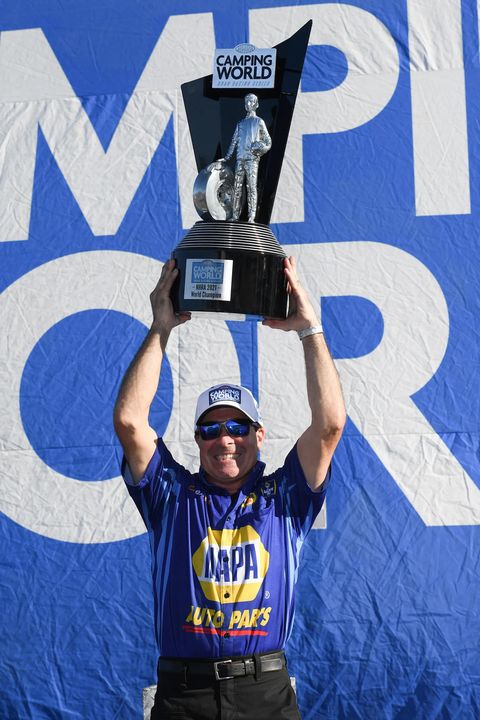 “But I got her now,” Torrence said. “I want her to say, ‘That was my dad who didn’t do that dumb stuff.’ I want to make her proud, make my wife and the rest of my family proud.”

He expressed his own pride in his “bad-to-the-bone Capco Boys,” saying they “have taken me to the front year after year. They stood tall when they needed to. I don’t know how we got here, but it’s nothing short of the grace of the Good Lord and my mom and dad who supported my dream all my life.” At just 38 years old, he has survived cancer as a teenager and a heart attack a few years ago that was attributed to his cancer treatment.

He gave kudos to Brittany Force, his closest challenger. Her only hope Sunday was that Torrence would lose in the opening round and she would win the race. Neither happened, and she said after losing in the opening round to Billy Torrence, Steve’s dad, “Overall, it’s been a great season. A lot of teams wish they could be in our position. I will say congratulations to the Capco team and Steve Torrence. They did an amazing job. We’ll be back here shortly, and I can’t wait to chase him down and start all over again.”

In the Funny Car showdown, Ron Capps’ march to add to his 2016 championship hit a detour. After neutralizing Cruz Pedregon in the first round by winning against Terry Haddock, Capps lost his match-up with Matt Hagan and had to wait until the semifinals to clinch. Alexis De Joria defeated Hagan by eight-thousandths of a second to end Hagan’s bid for back-to-back titles and his fourth overall. 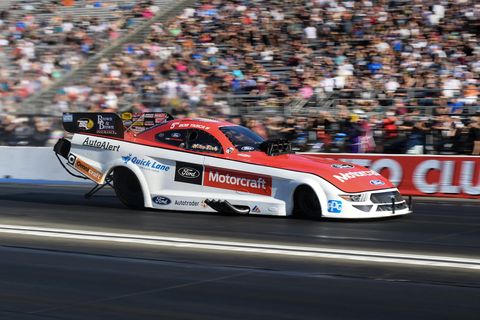 “Hagan, that whole team, is incredible and I expected him to go win the race,” Capps said after completing his sweep of the two Pomona events. He said a second championship was not something he could fathom, although he longed for it. He said he was “not thinking it could ever happen again because Funny Cars are so tough. No matter what, I’m never going to be ever close to the winningest Funny Car driver. I’ve just kind of chugged along with some great people and done our thing. It doesn’t bother me that I’m never going to be the winningest anything in Funny Car. I’m happy to be second to the GOAT (Greatest Of All Time, John Force). It’s OK. I’m proud to do that. I’m proud to represent.”

He said his second title “validates a little bit” and that he “couldn’t have scripted it better for this next step in my career.”

Capps hasn’t tipped his hand too much about his 2022 plans, but he said Sunday night that he plans to make an announcement Dec. 9 at the PRI trade show at Indianapolis.

He did say, “I’ve been calling on all these [team] owners about advice on what to do next.”

Indications are he, like Top Fuel’s Antron Brown, will become the fourth to depart DSR this offseason, making the defection unanimous. Speculation is that he will own his own team but least equipment from DSR, where he will have a technical alliance.

Hagan congratulated Capps and said, “I love that guy, man. He’s a true veteran out here. They outworked us this year, and we get to come back and try to fight him again next year. But I just want to say, I’m proud of Dickie Venables, my entire crew. We’ve battled back after having a couple bad races. I’m happy for Ron. I’m sad for us, but at the end of the day, the sun comes up and goes back down tomorrow. We get to work hard during offseason to come back out here and kick everybody’s butt.”

Bob Tasca III took the Funny Car race victory, keeping his eye on the Wally trophy. His grandfather, Bob Tasca Sr., whose team won at this track more than a half-century ago with driver Bill Lawton, used to race himself and acquired the nickname “The Big Bopper.” Grandpa Tasca’s motto was “I didn’t come out here to get a sunburn.” And that’s what the racer known as “BT3” has adopted.

It paid off, as the Motorcraft / Quick Lane Ford Mustang owner-driver left with his ninth victory and third of the season.

It irked him to say the words: “We know we can’t win the championship.”

“But to be honest with you, my whole career, I’ve never believed I’ve had a better chance of winning a championship than I do right now,” he said. “With the people we have, the talent, my experience in the car, I really feel like my best chance to win a championship is right in front of me. That’s a great feeling. So as sh—y as it is – I’ll say the word sh—y – not to leave here with a chance to win the championship, it’s a really great feeling that I have. I’ve worked my whole career to have the group of men that I have right now in that trailer [and] sponsors that I’ve always dreamed to represent. So, yeah, I feel really good about going into the next season. Four final rounds, two wins, and we can pick up another win. That’s a good season. We’ll just take it into next year.”

He said what will keep his name in the championship conversation until the end of the season next time is a better inventory of clutch discs.

“We really ran into some clutch-disc issues, and we struggled badly through, I would say, the tail end of this season. We just couldn’t get what we wanted due to, I think, a variety of life issues with COVID right now, with materials and so forth. So we did get behind the eight-ball quite a bit on that. The good news is we really learned a lot of what we like and don’t like, what the race car likes and doesn’t like. So I just think that going into next season, we’re going to have a lot more inventory of clutch discs that will give these guys a lot more flexibility and not be at the mercy of just supply issues, to be quite frank, that we weren’t anticipating.”

“I got a hell of a sendoff [Thursday] over at Hendrick headquarters [at Concord, N.C.]. It was like a pep rally at a high school. It was very neat. I’ve never had anything like that. and was basically told by Mr. [Rick] Hendrick that either bring that big trophy home or don’t come home. It was tongue-in-cheek, but he likes to win. The entire organization just loves to win. They were all behind me.”

And Anderson felt the pressure after Hendrick Motorsports headliner Kyle Larson claimed the NASCAR Cup Series championship, the 14th for his organization. Anderson said on the eve of eliminations that “my gut tells me I think it’s ours. I don’t think I’ve ever been more confident. In my heart of hearts, I know I’ve had the best race car in the class all year long. It would just be a crying shame to squander the opportunity and not get it done.”

He had to hold off archrival Erica Enders, and he did. He beat her in an epic semifinal battle, postponing her chase at a fifth title, as well.

“It’s tough,” Anderson said of his association with Rick Hendrick. “On that side of the fence, in NASCAR, they’re dominating. They’re winning every race. They’re kings. They’re heroes. And I feel like I’m not holding my end of the bargain up unless I’m winning every race. So I’ve got to find a way to do it, got to find a way to win, to keep pace with the other side of the team. That’s the situation I’m in – but I like it.”

He said he spoke with Larson just Thursday.

He sealed the deal with his 99th career victory, and afterwards, the 60-year-old said, “Apparently I’m not too old. Don’t throw dirt on the grave just yet. I’m not ready to step in just yet. It’s been a magical season, for so many reasons, in so many ways.” One highlight along the way was becoming the Pro Stock class’ most successful driver and second in all NHRA pro classes to 154-time winner John Force.

The Pro Stock Motorcycle class, for all intents, became a two-racer showdown after qualifying finished Saturday. No. 2-ranked Steve Johnson committed a center-line violation in the final qualifying session, and that stuck a pin in his celebration balloon. It came with a 15-point penalty that dropped him to third in the standings, as Angelle Sampey moved up to No. 2 in pursuit of her fourth championship. However, Smith dismissed her in the second round to secure his fifth championship.

Sunday’s final results from the 56th annual Auto Club NHRA Finals at Auto Club Raceway at Pomona. The race is the final of 20 in the NHRA Camping World Drag Racing Series: