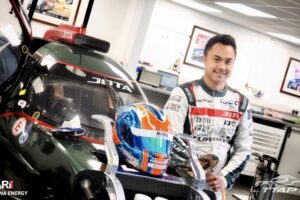 Malaysian racing driver Jazeman Jaafar is making his return to a race seat in the LMP2 class with United Kingdom-based Jota Sport, following his previous race entry in 2018. That was with the entry then known as Jackie Chan DC Racing Jota Sport, as part of an all-Malaysian driver line-up also featuring Nabil Jefri and Weiron Tan for five races that year, taking the LMP2-class win at the 6 Hours of Fuji.

Jazeman began this year at Jota Sport as development and reserve driver, while at the same time joining the team as lead mentor to the quartet of apprentice engineers from Malaysia under the Malaysia Automotive, Robotics and IoT Institute (MARii) Technology Transfer Apprenticeship Programme (TTAP).

This weekend, Jazeman enters the 4 Hours of Monza endurance race that is part of the European Le Mans Series (ELMS), sharing the #82 Jota Sport Oreca-Gibson LMP2 race car with Sean Gelael from Indonesia. Jazeman had a chat with paultan.org earlier this week, offering a glimpse into the workings of the team in preparation for an endurance race weekend.

With the 4 Hours of Monza in mind this weekend, how will Jazeman fit his role as mentor for the apprentice engineers around his seat time in the race car? “Everything has been very smooth with the apprentice engineers,” said Jazeman, which makes his preparation for the race along less tricky a juggle alongside his mentoring duties for the young Malaysian engineers.

In the Jota Sport team, there are typically four engineering debrief sessions over the course of a day at each race weekend. These consist of two pre-session and post-sessions, capped by a debrief with the race drivers for a total of five sesssions in a day for the engineers.

For the MARii apprentice engineers embedded with Jota Sport, they will join the engineering debrief sessions, though pandemic control restrictions dictate that the group of four are divided into two separate pairs at each session.

The MARii engineers will also listen in on radio communications to better grasp the progess made on track, and the quartet will join Jazeman at the driver debrief session at the end of the day. What areas do the MARii apprentice engineers observe at Jota Sport as the team prepares for a race weekend?

“[For their first race weekend] at Portimao, the MARii engineers looked at basic knowledge such as tyres, while for the past two weeks in preparation for the 4 Hours of Monza they have been working on six parameters, which consist of the simulation before the race weekend, timing, strategy, car performance, driver performance as well as tyres,” said Jazeman.

In terms of simulation, Jota Sport employs a Monolith AI suite to simulate the race car’s weight and tyres in order to determine gearing and resultant speeds through various sections of a given circuit before the car turns a wheel at the racetrack. These data sets are then brought to the driving simulator at Jota Sport in the United Kingdom, where the team’s drivers spend time before heading out to the track.

Though naturally there is a learning curve that took the MARii apprentice engineers some time to adapt to, Jota Sport has been guiding them through each department, overseen by three race engineers from the core race team, said Jazeman. Operationally, the trackside engineer support at Jota Sport has also grown in the three years since he has last competed with the team in LMP2, said Jazeman.

“In 2018, there were seven engineers tasked to two cars,” he said, adding now there are 13 engineers because the competition is so much tighter, “therefore it becomes even more crucial that every decision is done right,” he said. For Monza this weekend, Jota Sport’s personnel is capped at seven engineers due to pandemic restrictions.

For the Malaysian apprentice engineers, the plan certainly is for them to enter the automotive industry with their skills and experience acquired. “With the partnership that we have for their experience with Jota Sport, hopefully that will bring the knowledge into the automotive OEM companies, and then further elevate the skills to further drive the industry,” he added.

In addition to the development of engineer talent, the interest from MARii in endurance racing stems from the ongoing talks regarding the new regulations for the LMP2 category that are rumoured to go either with hybrid electrification with “much more emphasis on electric drive than LMH or LMP1” currently has, or hydrogen. The thinking at MARii is that the way automotive manufacturer interest develops in the prototype endurance racing classes offers a good idea of what they will choose to develop in terms of fuels and powertrains, and in turn better inform policy direction in Malaysia, Jazeman explained.

Currently in LMP2, participating teams are free to choose their fuel suppliers, as long as the fuels used fall within stipulations. In terms of the adoption of hydrogen as a power source, there are signs of growing hydrogen use in Malaysia, starting from East Malaysia in particular, said Jazeman.

In terms of the car itself for Jazeman, there are marked differences to the car in the present day compared to that which he entered with the team in 2018. The recent change in LMP2 regulations have been quite challenging in the efforts to retain as much performance as possible, having to deal with not just a weight penalty of around 30 kg, but also a power reduction of 20 hp, he said.

“The weight is affecting the car at the moment because there is also less downforce,” Jazeman noting the latest LMP2 regulations which also stipulated changes in order to widen the gap from the top prototype racer class, Le Mans Hypercar that took over from the LMP1 category. What’s allowed is the Le Mans aero package for this year, which Jota Sport has employed for the four-hour race at Monza. The team aims to maximise top speeds at the Italian circuit where LMP2 cars typically have reached up to 336 km/h, said Jazeman.

It isn’t as simple bolting on a low-downforce kit and going flat out, the Malaysian racing driver noted. The nature of endurance racing means that racers will be looking to maximise their speeds throughout the races, even when the car needs to be preserved for much longer than a sprint-format race.

For endurance racing at Monza, care needs to be taken with the left-rear tyre that tends to take a beating, with the circuit’s seven right-hand turns and four left-hand turns, said Jazeman; the aim will therefore be to minimise rear wheel slip.

How do racing drivers determine how hard they should push over the course of a race? This is where the artificial intelligence and simulation – which the MARii apprentice engineers have observed in operation – come in handy. A particular simulator session of note saw Jazeman spend three hours specifically working on upshifts, he said, where fully optimised, brought an additional 2 km/h to his top speeds. Minuscule in road driving terms it may be, but useful in chasing tenths of a second in lap times, and most valuable over a four-hour race.

After Jazeman’s aforementioned simulator stint for perfecting his upshifts, that was followed by honing the lift-and-coast technique, he said. Drivers also learn to save fuel in simulator training; for endurance races, fewer stops for fuel means a greater advantage towards a stronger track position, aiding in better race finishes.

This isn’t just lifting off the throttle and braking early, said Jazeman; throttle inputs need to be optimised along with maintaining strong braking performance in order to keep producing quick lap times, he explained. “So, you cannot just lift [off the throttle] and coast like you are on a Sunday drive; this is lift-and-coast with performance,” he added.

The key to endurance racing is sustained performance, which the team will be in pursuit of to get the best possible race result. The #82 Jota Sport car of Jazeman and teammate Gelael will start 11th, with Gelael as the team’s starting driver for the 4 Hours of Monza. This upcoming round of the European Le Mans Series is scheduled to begin today (Sunday), 5pm Malaysian time.