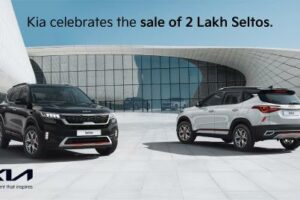 58% of Seltos sales come from its top variants.

Earlier this month, Kia became the fastest brand to cross 3 lakh sales in India. Now, the carmaker has announced yet another milestone. Over 2 lakh units of the Seltos have been sold in 2 years.

The Seltos was Kia’s first product for India. It makes up 66% of the brand’s total sales. While 58% of Seltos sales come from its top variants, the automatic options of the vehicle contribute to more than 35%. Diesel variants account for more than 45%, while the iMT variants are also said to have received a positive response.

Kia has also announced that it has sold over 1.5 lakh cars equipped with the UVO connected car platform. The Seltos accounts for over 78%, while the Sonet makes up 19% of the total connected Kia sales. The Seltos HTK 1.5 Petrol variant is said to be more popular with customers.