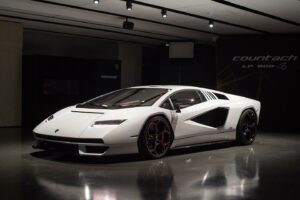 The 50th anniversary of the Lamborghini Countach was always going to be a big birthday in Sant’Agata, but very few would have expected the car itself to return. But here we are: the 2021 Countach LPI 800-4, a car “exemplifying the Countach’s legendary design and engineering pre-eminence in a pure and novel interpretation.”

Even without the badges, nobody would have much trouble identifying this as a 21st century Countach. It’s sharp, wedgy and dramatic, front-end tapering and rear broad to accompany a gigantic V12. Lamborghini says the Quattrovalvole Countach inspired the low, rectangular grille and the headlights, with the lines in the roof evoking the early Periscopio cars, while the wheels are meant to look like the teledial rims of the 80s. Only now they’re 20- and 21-inch in diameter, with ceramic brakes behind. Note as well there’s no spoiler for this Countach, again like those early cars. Lambo’s head of design Mitja Borkert said the original was “provocative and polarising”, with an “infamous recognisability”; this car “elevates that clarity to a new level.”

Underneath the new look sits more familiar Lamborghini tech. The iconic 6.5-litre V12 is rated at 780hp, like the Aventador Ultimate, only the Countach also gets the supercapacitor mild-hybrid technology from the Sian FKP 37 as well. Here that contributes 34hp, for 814hp in total. That explains the name, too: LP is familiar from other Lamborghinis, for the Longitudinale Posteriore of the engine, with I for ‘Ibrida’, or hybrid. Everything really does sound better in Italian.

814hp in a car with a 1,595kg dry weight (the Sian is claimed to be 1,600kg by the same measure, an Aventador 1,550kg) means more than ample performance: 0-62mph is claimed in 2.8 seconds, 0-124mph in 8.6 seconds and a top speed of 221mph. Obviously, four-wheel drive is standard, and it seems likely the Countach will drive through the ISR automated manual gearbox. So there’ll certainly be some old-fashioned supercar drama there. Lamborghini CTO Maurizio Reggiani said the pioneering approach of the original Countach “inherently drives Lamborghini R&D” to this day, resulting in “the pioneering hybrid technology in the LPI 800-4, and the emotive driving experience and top-line performance expected from a flagship V12 Lamborghini.”

Given that Lamborghini’s entire 1,500-word press bumf on the Countach LPI 800-4 doesn’t mention suspension at all and features a solitary shout out for the brakes, we’ll have to assume that much is carried over from the Sian. Which was described as having a “punishingly firm” ride in the recent PH review. But style never came without compromise, right? Speaking of which, it’s probably worth discussing a few more Countach design highlights. When a car has a photocromatic roof (one that switches from opaque to transparent by a button) as a reminder that it’s a “future automotive screensaver for the 21st century”, you know there’s plenty to say.

Carbon accents are available for the front splitter, bonnet, mirrors and air intakes; naturally, it’s liberally applied inside as well. The historic influence continues for the interior, with a square motif stitched into the seats like something from the 70s, and if ever a Countach driver forgets what they’re driving, there’s a new button called ‘Stile’. That’s ‘Design’ in English, and when pressed the car will then explain “the Countach design philosophy to its privileged audience.” Yes, really. They’ll be sitting in a cabin offered in four configurations while doing so, some in a single colour and some two-tone.

Though the car shown at the Quail is a homage to Ferruccio’s own LP400 S, with Bianco Siderale paint and a red and black interior, many other exterior paints are available. Plenty are historic, with solid colours like Viola 30th, Impact White and Giallo, but there are more modern hues as well. Quite frankly, given how rare and expensive these cars will be, Lamborghini will probably paint a Countach LPI 800-4 any colour you like.

Speaking of which, Lamborghini has confirmed that 112 of these will be made, a nod to the ‘LP112’ project code the original was developed under. A price hasn’t yet been revealed, but there seems little doubt that this will be a seven-figure supercar. If perhaps less than the more exclusive, €2.5m Sian, it wouldn’t be a surprise to see the LPI 800-4 nearer two million euros than one. Neither would anyone be shocked to see all 112 go pretty fast – it’s been a while since anyone’s had the chance to buy a brand new Countach, after all…