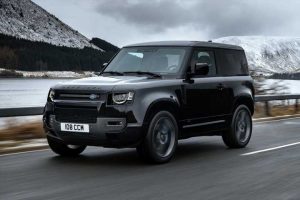 A V8-powered version of the new Defender has always been something of an open secret. Not just because the car was caught testing around Gaydon umpteen times last year, but because Land Rover could hardly wait to tell everyone about it. Early queries were met with terrible poker faces. The smirks said it all: yes, of course we're building it. And yes, it's brilliant.

The ingredients were hardly in question either. JLR's decision to prolong the lifespan of the 5.0-litre supercharged V8 may seem counterintuitive when balanced against its newly announced electrified future, but who are we to argue with the prospect of 525hp and 461lb ft of torque – especially when the Defender seems a mite underpowered when furnished with just 400hp.

At 4.9 seconds to 60mph (or 5.2 to 62mph) Land Rover says it's the fastest and most powerful production Defender ever made, which rather makes sense when the previous iteration was powered either by a Rover V8 or (much more recently) the 5.0-litre in naturally aspirated format. The manufacturer doesn't proclaim it, but we're going to go right ahead and say it's the best handling Defender ever made, too. It certainly sounds it.

Alongside the obligatory revision of spring and damper rates, the V8 gets a new Electronic Active Rear Differential and beefier solid anti-roll bars. Obviously that's about keeping the car's substantial lateral load in check, but Land Rover had also gone to the trouble of introducing what it calls a Yaw Controller – and we all know what that means.

Putting a finer point on it, the press bumf says it 'allows fine control of the Defender V8's cornering attitude as it reaches and exceeds the limit of grip'. There is now a 'Dynamic' mode, which Land Rover has added to the Terrain Response 2 system so that owners can indulge a 'more agile, playful and responsive character'. Say no more, chaps.

Naturally the engineers are at pains to point out that all this is intended to work on loose surfaces – because the Defender's status as a world-class off-roader is of paramount importance – but there seems little doubt that this is all about ensuring the car does the business on-road. 'Unrivalled agility and driver appeal' is not a phrase anyone would typically associate with the Defender, even in its current format.

Elsewhere the V8 gets a number of design enhancements – notably the quad exhausts and unique 22-inch wheels with blue brake calipers at the front – but the model hasn't been treated to the kind of bodykit an SVR overhaul would entail; the Defender's new silhouette remains very much intact. That said, there is a higher tier Carpathian Edition version if you really must, although even it is more about a dusting of styling confetti (a Satin Protective Film wrap, no less) than fundamental alterations.

It's a similar story inside, where the seats are trimmed in unique Ebony Windsor Leather with suede accents, and the exposed beam-dash is subdued Satin Black. The four-spoke steering wheel gets an Alcantara rim and tactile satin chrome gearshift paddles, and there's a V8 identifier on the illuminated tread plates along with the option of a larger 11.4 infotainment screen (something that's rolled out across the range, together with an XS trim to replace the First Edition).

Not exactly an homage to previous Defender V8s, it must be said – but appropriate for the cost. Which is substantial. Prices start at £98,505 for the 90 and £101,150 for the 110. You hardly need us to tell you that puts it in the same ballpark as the Porsche Cayenne Turbo, the Audi RS Q8 and even the Range Rover Sport SVR. But Land Rover will be confident about differentiating the Defender from other performance SUV offerings. For what it's worth, the Mercedes-AMG G63, arguably the car's closest rival in terms of ethos, starts at £151k.