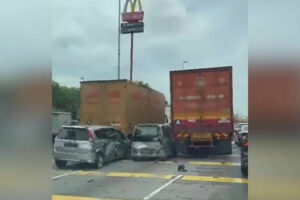 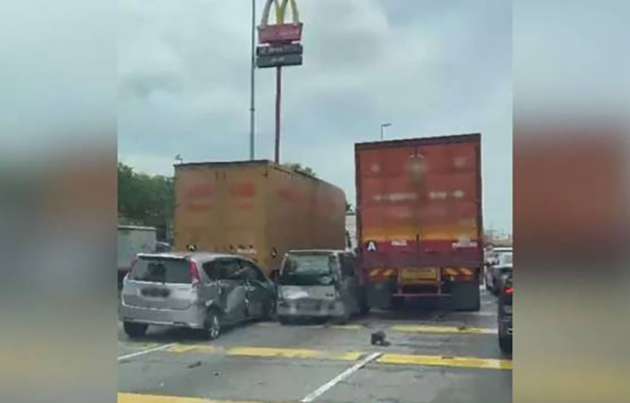 Stationary cars rammed by a lorry, again. This time, eleven vehicles were damaged when a trailer lorry crashed into them at a traffic light intersection in Shah Alam. Specifically, it happened noon yesterday at the Persiaran Tengku Ampuan traffic lights, in front of the McDonald’s Section 22 drive-through outlet.

Fortunately, no one was injured and all the owners of the cars involved went on to make police reports. Shah Alam district police chief Mohd Iqbal Ibrahim said that investigations found that the trailer could not stop in time when the vehicle in front of it suddenly braked. He added that urine tests on the truck driver was negative for drugs and he had no previous criminal record.

“The case is being investigated under Section 42 of the Road Transport Act 1987 for dangerous driving. Witnesses are asked to assist investigations by contacting investigating officer inspector Muhammad Hasrul Suhiami at 011-31215697,” he said, reported by Sinar Harian, which posted the image above.

Sounds familiar? Last month, a lorry ploughed into queuing vehicles at the Causeway, Singapore-bound. Two weeks ago, there was an accident on the PLUS highway where a cement lorry crashed into some cars and skipped into the opposite direction. In April, at the infamous Menora tunnel stretch on the PLUS, a lorry with faulty brakes ploughed through five cars.

And of course, who can forget the one last year at Jalan Ipoh where a speeding lorry squashed a Myvi in front of the famous yong tau fu restaurant.

The latter incident led us to dive deep into the rules and regulations governing commercial vehicles, mandatory inspection, maintenance and the enforcement aspects. What’s the root cause behind all these lorry accidents and what should be done to reduce these accidents? Full story here.