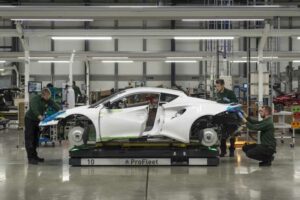 If lacking the pre-war romance of some car factories, there’s no denying the long heritage of Lotus’s Hethel site. It’s been home to the much-loved British sports car brand since 1966, and while there might have been the odd lull in the production line, there’s always been something good going on at the plant in the 56 years since then. Which you can now learn about all over again with the return of factory tours for the public.

These have been unavailable since November 2017, as that’s when the £100m redevelopment of Hethel – to establish the Emira production line, among other things – began. What with one or two other delays in recent years, not to mention the pandemic’s restrictions, it has only become viable to open the tours back up all this time later. The first will take place on April 4th.

The two-hour tour takes in the Hethel test track, the old part of the factory where the Elise, Exige and Evora were built, the snazzy new Emira bit and an experience of “how all Lotus showrooms will look in the future.” Groups of eight will be led around by an expert guide, and the really keen ought to look for a day (the tours operate Monday to Thursday) that runs a Heritage Tour.

This upgrade includes a visit to Classic Team Lotus, a separate business located over the road from the main facility, and run by Clive Chapman – the son of founder, Colin – which includes an unrivalled collection of historic Lotus race cars.

The relaunched tours have been devised by the newly inaugurated Lotus Advanced Performance department. Director of Lotus AP Simon Lane commented: “Tours of the Hethel site were part of the Lotus story for many years and hugely popular. We get emails and calls every week with people asking about them but, with all the development work on site, it was not appropriate to have the public here. With the Emira now in production, I’m delighted to announce that the time is right to relaunch the factory tours.”

The tours are bookable now via the Lotus website; a standard tour costs £95 and the Heritage is £140. Those planning a family day out should be aware that it’s a maximum of two children for each adult, in case you were going to be responsible for the whole brood. Gotta start them young on the Lotus education, right?