The Lucid Air Dream Edition won’t make it quite the claimed 517 miles range Lucid said it would, at least not in the launch edition. But it will go 503 miles if you get the 19-inch wheels. So what’s 14 miles range between friends?

It is also going to cost considerably more than the “under $80,000” we’d heard, at least at first, when it’s launched in the second quarter of 2021. At launch the car available in Lucid showrooms is the Dream Edition, costing a whopping $161,500. Less-expensive trims will roll out over the next two years or so, including one less than $80,000.

Also, instead of the 130-kWh battery said to go 517 miles, the Dream Edition has a 113-kWh battery pack said to be tuned for performance over range.

Why the sudden drops in range and battery capacity?

“The Dream edition is a rare combination, a unique combination,” explained Lucid ceo and cto Peter Rawlinson at a one-on-one technical briefing a couple weeks before the launch at the Lucid showroom in Beverly Hills. “It combines a perfect combination of performance and range.” 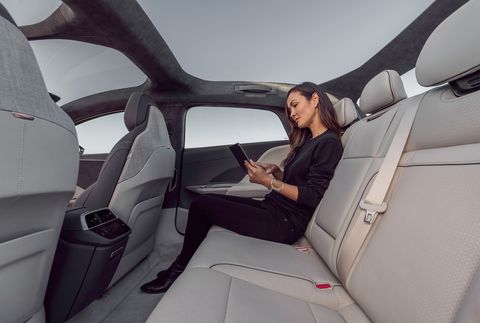 The 503 miles is still well beyond that of Lucid’s chief rival Tesla. Its Model S can go 402 miles in “Long Range” trim. And if you really want it, you can get the 517-mile Lucid Air “in mid-’21,” Rawlinson promised.

Other specs Lucid has already revealed about the car: 1,080 hp from front and rear motors; 0-60 in 2.5 seconds; quarter mile in 9.9 seconds; fast charging that gets you 300 miles range in 20 minutes; a 0.21 cD. The claim still on the Lucid consumer website that the car can go “over 200 MPH” was missing from the press release distributed at the car’s launch. The highest speed of any model listed there was 168 mph for the Dream Edition.

OK, let’s get over those “points.” There is a lot of technology packed into this luxury electric four-seater. Lucid claims the car will set benchmarks in several fields of EV development. Most are made possible by efficiencies throughout the various systems powering the car. 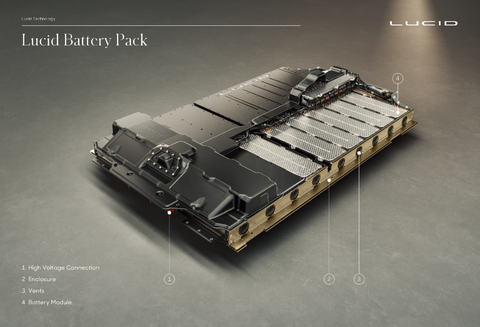 For instance, the battery. Did you know Lucid makes the batteries for Formula E? There is a Formula E battery pack in the showroom in Beverly Hills about the size of that TV set you had in the late-70s or early 80s.

The battery in the Lucid Air street car consists of various numbers of 21700-sized lithium ion battery cells. The 21700 batteries are slightly larger – 25.6% – than the old standard 18650 batteries but hold 43-percent more energy. Lucid purchases them from Sony Murata and packages them into Lucid’s trays under the car. Rawlinson was the original Tesla Model S’ chief engineer, btw. They use a similar battery packaging philosophy. The battery tray under the car can be packed full of batteries or they can leave a space for the rear passenger’s footwell. Or they could be packaged for a shorter-range, lighter, less-expensive configuration that would go, say, 380 miles instead of 503 or 517. But they’re not exactly the same cells found in the race cars.

“These are pure energy cells because we want to go for range and efficiency,” Rawlinson said, as he walked us from the battery display to a full-size drivetrain mockup. 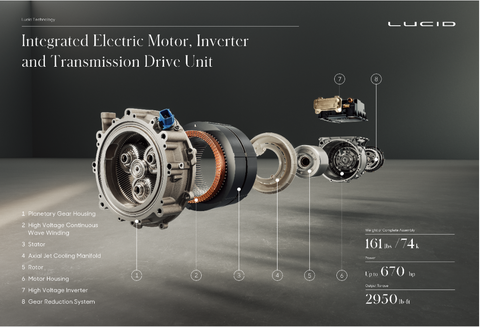 “So that’s the integrated power unit,” he said, pointing out a roundish unit that was in size somewhere between a coffee can and a fire hydrant, though closer to the coffee can. Inside was a permanent magnet electric motor, an inverter, an integrated transmission and a differential. It was a miracle of efficient packaging. Lucid calls it a “…state of the art, 900V+ electric drive unit that weighs just 163 lbs and is small enough to fit inside a standard airline carry-on roller bag.” In case you want to carry your car motor onboard your flight with you. Explain that to TSA.

At 650 hp apiece, Lucid says each motor offers “…a power density that is well beyond anything else offered on the EV market at 41 hp per liter.”

That compactness allows for one, two, or even three motor units to be placed in a Lucid Air. Though if you had three motors you couldn’t just multiply 650 X 3 and get 1,950 hp, the battery wouldn’t make that much hp, Rawlinson said. But you’d get a lot of twist to the driven wheels, for sure. The dual-motor Dream Air at launch will offer 1,080 hp.

Next on our technology tour was The Wunderbox or, “The multicore boost charger,” Rawlinson said. This was beginning to seem like Wily Wonka’s Chocolate Factory.

“This is a two-way charger. And this is on every Lucid Air… it’s compatible with fast-charging through the Electrify America network. And as we recently stated, we can actually charge up to 300 miles in 20 minutes.”

Offering two-way charging means you can route power from the car’s battery to your home, or your cabin, or to another electric car. (Two-way charging should be on all electric cars if for no other purpose than to prevent rolling blackouts at peak electric demand like we just had here in SoCal a couple days ago. That it’s not on every EV made now is a travesty. In my opinion.)

Outside is a design that is “…not quite a fastback,” according to design director Derek Jenkins. “It’s elegant and sporty.” The packaging “…contributes to the subtly different and modern proportions for the Lucid Air, without relying on any traditional automotive design cues, instead delivering a beautiful car that looks entirely distinctive on the road,” said Lucid. It’s a different look from Tesla or Taycan.

Inside, Lucid says the Air offers the space of a 7-Series. I sat in one front and back and felt comfortable in either seating position. In back the rear seats will be benches instead of separate rear seating positions divided by an armrest console, though that configuration comes later. 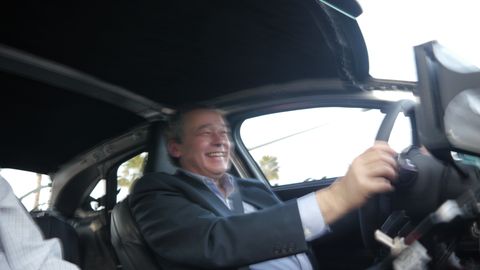 In front of the driver is a 34-inch curved glass 5K display appearing to float separately from the dash. Another screen in the center position offers access to controls for both driver and passenger. Redundant controls adorn the steering wheel.

Both the frunk and the trunk are dual-tiered for packing versatility. The frunk has “…as much capacity as Tesla, Taycan and I-PACE combined,” said Jenkins.

The Lucid Air will also incorporate no less than 32 sensors including cameras, radar and ultrasonics, plus what Lucid says is the world’s first standard high-resolution LIDAR in an EV. The sensors will work with the Driver Monitoring System and geo-fenced HD mapping “…to provide the safest possible approach to Level 2 and Level 3 driver assistance technologies.” We’ll try that out later when we get a chance to drive the car.

Dealerships are being opened as we speak, but not many. See www.lucidmotors.com to find one closest to you. The one in Beverly Hills has a seating buck customers sit in wearing AR headsets to try out different interior choices. I tried it, it works.

As electric cars become more and more popular, particularly in the luxury car segment, it looks like Lucid is launching its entry at just the right time. If only the more affordable model was coming sooner… aw, I still couldn’t afford it.

END_OF_DOCUMENT_TOKEN_TO_BE_REPLACED

END_OF_DOCUMENT_TOKEN_TO_BE_REPLACED
We and our partners use cookies on this site to improve our service, perform analytics, personalize advertising, measure advertising performance, and remember website preferences.Ok