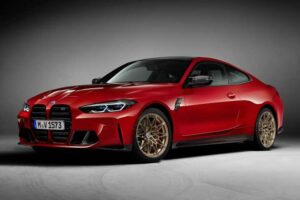 ‘Fünfzig Jahre M’ is back in the news, as BMW M continues to mark its 50-year anniversary. And it was exactly 50 years ago today that the partnership agreement for BMW Motorsport GmbH was signed. To mark this milestone, the company is having some limited-run fun. It’s producing a series of specials based on the current G80 M3 and G82 M4, called the Edition 50 Jahre BMW M.

Don’t get too excited, though. Firstly, these won’t be coming to the UK. And if you’re reading from outside these shores, then there’s not a huge amount to get salivating over. If power, power, power is your thing, then there’s nothing to see here. These M 50 Jahre models won’t be using the uprated 550hp version of the 3.0-litre turbocharged ‘six’ that was announced last week for the CSL. It’s the standard 510hp of the M3 and M4 Competition models only, we’re afraid, but still with a choice of rear- or four-wheel drive.

What you’re actually getting seems to amount to some new colours for the body and wheels, and some extra badging inside. Yet, according to BMW, this will ‘ensure each edition vehicle can become a unique car that reflects the personal style of its owner.’ In European markets, the M4 will be available in Carbon Black, Macao Blue, Brands Hatch Grey, Imola Red and San Marino Blue. China will also get two more colours: Stratus Grey and Fire Orange – the latter marking the year of the tiger.

The wheels are the same forged, double-spoke design – 19 inch at the front and 20 inch at the rear – as the Competition, but offered in either Orbit Grey or Gold Bronze matte finish. Inside, the M4 comes with ‘Edition 50 Jahre BMW M’ scribed onto its sill finishers, there’s a metal plaque on the centre console bearing the same, and it’s embossed onto the front headrests as well – you still have to pay extra if you want the M carbon bucket seats, by the way.

If you fancy an M3, you’ll have to be based in the USA or Canada, because those are the only markets that are taking it. Again, there are new colours – this time Vermilion Red, Techno Violet, Interlagos Blue, Fire Orange and Limerock Grey – and Orbit Grey wheels, along with the interior trimmings we mentioned for the M4. But you can also get some styling add-ons that ‘are inspired by racing in terms of design and technology’: a carbon BMW M Performance front splitter, rear spoiler and tailpipe trims in carbon and titanium.

Oddly, the press release seems to suggest these items will not be available on the M4. And while it states that the M3 will be limited to 500 examples, it doesn’t say how many M4s will be built – we’d assume the same number, but haven’t had that confirmed yet. Nor how much extra you’ll need to pay for this. To be honest, when we said limited-run fun at the start, it turns out the fun is really quite limited…