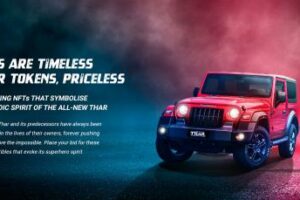 Mahindra’s Thar NFTs are based on blockchain technology.

Mahindra & Mahindra has announced its entry into the NFT (non-fungible token) space, with the release of its first tranche of tokens.

Mahindra is the first Indian OEM to offer NFTs, which have gained popularity in recent times. NFTs are based on blockchain technology. Mahindra’s first offerings will be based on the Thar, and will be released in collaboration with Tech Mahindra.

The first series comprises four NFTs that will be put up for sale via an auction on March 29, 2022, on Tech Mahindra’s NFT marketplace called Mahindra Gallery. The proceeds from the auction will go towards ‘Project Nanhi Kali’ to support the education of underprivileged girls in India.

The winners of the auction will be invited to the Mahindra Adventure Off-road Driver Training Academy at Igatpuri, Maharashtra or to the new Mahindra SUV Proving Track at MSPT, Chennai.