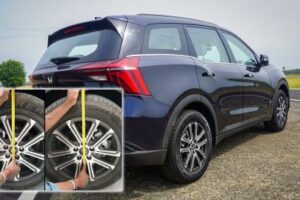 The issue cropped up within the first 1500 km of owning the SUV.

BHPian adneo recently shared this with other enthusiasts.

I would have preferred not to go public with my ordeal, since I am a strong supporter of Indian products and the XUV700 was a step I took to show my support and try to break the cliche that Indian products can’t be good.

I own a Diesel AWD AT and while I love the car for its handling, performance and capabilities, the after-sales support Mahindra enables through their dealers is just not mature enough to cater to a customer base spending Rs 30 lakh OTR.

On our way from Kolkata to Bangalore, we could distinctly feel that the right-hand side suspension was losing its strength and it degraded so much that the vehicle started to roll like crazy around left-hand corners.

But at the same time, it would ride flat around right-hand corners.

On reporting this and demoing this to the dealership they said they will get in touch with Mahindra technical team and the only response from Mahindra Techs to the dealer was to check on another vehicle.

2 weeks went by without any progress or updates.

On the 3rd week, I suddenly noticed that the car was tilted to the right even while parked in our basement. I confirmed my suspicions using a leveller gauge and measured the ride height as mentioned in the Mahindra workshop manual. As expected the right-hand side struts had gone down by 10 mm.

On sharing the video with Mahindra I was called to the workshop again and measurements were taken and shared with Mahindra.

After 2 weeks it seems Mahindra doesn’t recognise their own SOP about ride height measurement and they still want the dealer to measure a similar car which is just outrageous bcoz another car might have N number of variables like distances travelled, abuse taken etc.

I thought of sharing this with the wider group for everyone’s benefit so that they can proactively be alert and avoid ending up with a failed suspension in a remote location.

I have all documentation with me but am super frustrated to upload them. But I can share it with anyone if they are in need of it.

Seeing Mahindra’s ways of working, highly doubtful if the XUV700 would have gotten the ride and handling package without the insights from Ford!

Yesterday Mahindra sent someone from the plant to have a look at the car and he didn’t even open the suspension to physically validate the components. He asked me to drive my car and after I showed him the rolling issue he drove very sedately and told me there is no issue. Then we drove a brand new AWD car from the dealership demo pool and I felt there was no roll but this time he induced roll with very aggressive steering inputs.

His net observations are as follows:

In the meanwhile, I got ride height readings from a fellow TeamBhp member’s AWD which has done more kilometres than my car but has got equal ride height on both sides. The Mahindra guy just kept saying that difference is within tolerance.

I have told them that it cannot be such a coincidence that I felt rolling to one side first and then suddenly it turned out that the same side had a ride height difference.

It’s just appalling to have spent so much and then gotten such perception-based support. Feels like getting treated by a Quack doctor!

I am not giving up yet and I would request all members/owners to observe the suspension and in case of inconsistencies, raise it with the dealer so that they can no longer get away saying there have been no reports.

BHPian Mudhalaipatti who also faced a similar tilting problem had this to say:

While I didn’t take the readings from a perfectly flat surface, it was not an overly uneven surface either. The vehicle was unloaded and still, the rear driver side was “sagging” a good 2-inches than the passenger side.

The side-by-side view should help. A quick update to keep everyone posted on the progress.

I stuck to my point with Mahindra that the sequence of events and the complaints raised clearly established a connection between the rolling to the right and the right suspension sitting lower. After reaching out to the top management, finally, Mahindra sent in a team of 3 chaps from the R&D division.

On demoing the rolling problem one of the team members could feel it and the car was taken back and the rear suspension dismantled. As expected on measuring the rear springs the right side spring was found to have an inconsistent coil gap and so the rear set of springs was replaced.

Post spring swap the ride hide immediately got corrected and the car now sits straight without the signature “Pushpa” tilt to the right. I also TD’d the car after the swap and the rolling seems to have got contained to a certain extent.

The R&D team has requested me to drive the car for a few days to evaluate and then if required they might change the front springs as well.

While I am grateful to the top Management at Mahindra for sending in the R&D team to look into the issue, I still made it abundantly clear that a customer from this segment deserves a lot better and they need to scale up the after-sales experience and processes to be at par with the competition.

Keeping my fingers crossed, will post an update after I have covered a few 100 km on these springs.