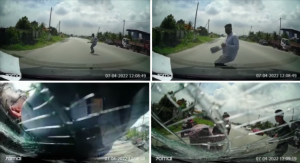 Things you don’t expect when driving: a group on cyclists racing downhill on a major road and this, a man sprinting towards you and launching himself on to your car’s bonnet. We all know the outcome of the former, and the latter situation could have been bad for the car driver as well, albeit on a much lesser scale.

This recent incident happened in Klang, after the third bridge heading to Kapar apparently. As you can clearly see from the dashcam footage, once the car turned the corner, a man from the opposite site of the road charged towards the car and then launched himself into the oncoming car, back first.

Upon impact with the car’s bonnet and windscreen, which has cracked, the man slides to the ground. Seconds after, a couple of people appear on the scene, including two women trying to assist the “victim”.

Now, to a passer-by, and even the police, this might look like a car mowing down a pedestrian, who is now injured and possibly mentally scarred. The car driver is clearly in trouble, especially when there are “witnesses” to support the version of events of the “victim”. It’s a scam, a form of extortion.

But there’s a twist. The driver told them to wait for the police as he had dashcam footage. Upon hearing this, the group, including the “victim”, quickly dispersed. According to the grapevine, police said that they know of the modus operandi of these scammers as other reports have been made by the true victims of these incidents – the motorists with damaged cars.

What can we learn from this? Unfortunately, there’s nothing much you can do when a man decides to throw himself on your car and use a mini mob to make you look guilty. But if you have a dashcam, the scam won’t work as their deeds are clear. So, if you don’t already have one, get a dashcam installed to protect yourself. You’ll never know when you need it.