Home » News & Features » Maserati GranTurismo gets V6 – and all the moves

Maserati GranTurismo gets V6 – and all the moves 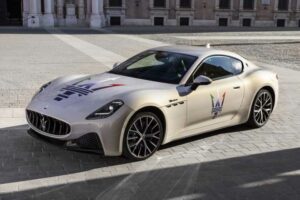 The previous Maserati GranTurismo occupies a strange space in the memory banks. On the one hand, it can justifiably claim to have kept the lights on at Maserati when the firm wasn’t indulged with the love and affection it is treated to now; on the other, it was arguably never quite the car it should have been. It often looked and sounded the business (the MC Stradale would have people spilling out of shops on a quiet high street) but the overall driving experience didn’t always meet up with the evocative billing.

Now, the model is back. Or at least it’s a long way done the road to its return, because Maserati has opted to reveal the new design ahead of its official debut. Which is slightly odd – especially as the manufacturer has declined to disclose any additional information – but we’ll forgive the brain trust in Modena, because a) the new GranTurismo is no less pleasant to look at than the old one, and b) we know it gets the latest ‘Nettuno’ V6.

Granted, the last car featured 8 cylinders arranged in a compelling vee, but the Nettuno engine is the one responsible for powering the mid-engined MC20 to considerable acclaim, and (in the Trofeo version at least) you can expect the unit to appear in a very similar format. Which certainly would bring the fight to a number of key rivals, not least the new – and also very easy on the eye – Mercedes SL. Indeed, its maker suggests that the new ‘generation is now ready to take the brand ahead into the future, emboldened by its unique style and driven by an innate propensity for innovation.’ Which is nice.

Of course, beyond the new V6, Maserati is referring to the other means of stretching the GranTurismo’s legs, which is almost certain to include a petrol-electric hybrid – and absolutely will feature a PHEV, because the all-electric Granturismo Folgore has already been confirmed. Albeit without any technical details. Regardless, Modena is at pains to remind us that the incoming GranTurismo represents a 75-year journey from the A6 1500, considered its spiritual ancestor. It would do well to remember that the demise of its immediate antecedent was quietly swept under the rug back in 2019. No matter how the wheels are ultimately powered, its replacement has its work cut out.