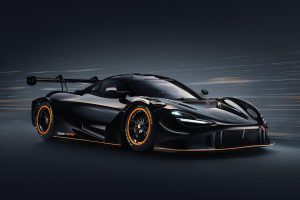 McLaren has produced its fair share of exceptional track day toys over the years, with everything from the 12C Sprint to 620R there for those who have found the standard Woking supercars a little soft. Re-affirming that is the motorsport arm’s latest creation, the 720S GT3X, which is essentially an unrestricted version of McLaren's most sophisticated race car. It’s been developed to give wealthy track day drivers a car that’s “considerably faster” than the 720S GT3, something that’s already pretty handy on circuit as is – as evidenced by the trophies it's collected the world over since it first went racing in 2019.

Without motorsport regulations to adhere to in the GT3X, though, McLaren Motorsport has been able to significantly turn up the GT3’s wick. With no restrictors and, handily, a pair of bigger turbochargers, the car’s 4.0-litre V8 now produces 720hp or, at the push of a button, 750hp, some 200hp more than the limited GT3 machine. To go with that added thrust, the cooling system and brakes have been uprated, ensuring more speed doesn’t mean overheating. Or too many visits to the circuit infield.

As you’ll have surmised from the pictures, much of the car’s performance is owed to the enlarged aerodynamic package fitted to its body, with larger pieces across the car, headed by a fixed rear wing. McLaren factory racer and test driver, Rob Bell, says the new wing was needed to “balance” the extra forces generated at the front, suggesting the overall balance will feel the same. But the downforce will be much higher, equating to greater corner speeds and quicker lap times. That, of course, will be driver dependant; naturally, McLaren’s track day drivers can receive tuition from the firm’s drivers, to help them get the most out of their machine.

It’s not all serious stuff, though, as illustrated by the fitment of a passenger seat, which in a very un-McLaren way adds weight to the car – and requires a re-shaped roll cage – but allows you to bring a passenger along for the ride. McLaren hasn’t changed the general raciness of the cabin, though, with the same steering wheel and digital display. The GT3X is as close to a two-seat racer as it's possible to get, surely, albeit one that isn't eligible for competition.

Pricing hasn’t been announced for the special GT3X – at this stage you can only “register your interest” – but we know the GT3 racer starts at around £440k, so something a little above that would seem likely. Rest assured we’re on the case for tracking down an accurate number. Although don’t get your hopes up for a bargain; motorsport performance doesn’t tend to come cheap…