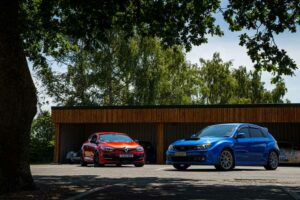 The Impreza 20th Anniversary was a JDM-only special edition – special enough to tempt Ben from his Megane?

We’re truly spoilt by the hot hatches on offer in the UK. There are the all-time greats from years gone by, and the newer kids on the block with the likes of Toyota proving once again that you can still make an exceptional hot hatch today despite ever-tightening legislation. Hot versions of otherwise humdrum models sell by the thousands, even if they aren’t the sharpest tools on offer.

Then we have cars like the Honda Civic Type R and Renaultsport Megane. Lauded by journalists as some of the best hot hatches ever made, but possibly never as big-selling as their respective manufacturers would have hoped. Take my Megane 275 Cup-S for example; only 130 were sold and even with Flame Red being the most popular, only 41 exist.

All-wheel drive hot hatches are all the rage right now, but the formula is nothing new. Subaru brought us the Impreza hatch 15 years ago, but we weren’t quite ready for it then. Like many, I hated the sodding thing when it came out. It was an absolute blasphemy that they moved away from the iconic saloon, and it looked like a Hyundai. Which even Hyundai would concede was a problem back then for a performance car. Yet time has been kind to the Impreza, and particularly the JDM models that the Japanese kept for themselves.

The UK cars are a rare sight now, and, naturally, the JDM imports even rarer, but thankfully importers like Torque GT and Harlow Jap Autos are working on that. What you’re looking at here is a Subaru Impreza WRX STI 20th Anniversary Edition, which to the layman is a tweaked JDM WRX STI. Then there’s the track-focused Spec C and the even more hardcore R205, which turns the Spec C up to eleven. They all used the more powerful 2.0-litre EJ20 and a twin-scroll turbocharger over the 2.5-litre we got in the UK models, producing from 308hp with an 8,000rpm redline.

I’ve been thinking about replacing my Megane with something with five doors for a while now and the Impreza has been high up on my shortlist. So, when I saw FSTi signed up to our Morgan Saturday Service with his, fate had clearly decreed we meet up for a chat. Cue the best impromptu twin test yet.

First, a bit more on the 20th Anniversary Edition. Subaru built 300 to celebrate twenty years of the Impreza and all were retained for the Japanese market. Its aforementioned output is still delivered to the road through an adjustable all-wheel-drive system and six-speed manual, but the special edition also benefitted from four-pot brake calipers up front, upgraded wishbones, anti-roll bars and bespoke dampers and springs, STi pillowball lateral links, an STi flexible front strut brace, STi front cross member support kit, and an STi flexible lower arm bar – although this specific car has been further tweaked with the suspension setup borrowed from an S206 Impreza.

I’ll admit I’m biased, but the Impreza looks exceptional on the road. It’s funny how things change with time. The paint pops in the sun, and it looks purposeful with its bulging arches and squat suspension. The exterior is more modern and subtly styled compared to the old saloons, especially if the big wing and gold wheels were a bit much for you. The EJ20 has equal length headers, losing the distinctive off-beat rumble we’re used to, but the flat-four Boxer sound is familiar low down in the rev range and there’s no mistaking it for anything but a Subaru.

Climbing into the well-bolstered driver’s seat, acclimatising myself with the controls and then firing it up, my first surprise was just how similar everything felt to my Blobeye Impreza WRX STI. I probably shouldn’t have been surprised, but given how much the car has changed externally, I guess I was expecting it to feel different mechanically, too. Sure, it has been a few years since I’d driven my old car, but the newer hatch brought everything back instantly, from the gear change to the throttle response.

Even with the twin-scroll turbo, the power delivery is old school – and all the better for it. Linear power delivery may be more efficient and practical, but it’s also boring. I’d take turbo lag and a massive rush as the boost builds any day, and that’s exactly what the Impreza delivers, right up to its heady redline. And boy does it feel fast; to think people are tuning these cars to beyond 400hp is bonkers. On the road, this is all the power you need in a beautifully balanced package.

Of course, the Impreza is equipped with Driver’s Control Centre Differential (DCCD), which enables you to shift power distribution to the front or rear, to improve traction or tighten cornering ability respectively. With the bias set towards the rear, the power delivery still feels neutral and the car is very composed entering a corner, even at speeds that I’d never dream of attempting in my Megane. The sheer grip summoned up by the Impreza is mind-bending at times, and certainly confidence-inspiring.

Obviously, you have to drive the Megane a little differently. Trail braking into a corner helps the car pivot as you feel the weight transfering forwards, before mashing the throttle for the mechanical limited-slip differential to do its thing and throw you out the other side. The electric steering rack in the Megane is still one of the best I’ve ever experienced, managing to transmit feedback in a way that the hydraulic rack in the Impreza never does. Despite that, both cars are adept at letting you know when it’s time to push on or back off.

There’s very little travel in the brake pedal in the Impreza and overservoed it is not, requiring a firm press to slow it down. Not that you need to bother braking much entering a corner anyway, once you can get your head around the outrageous degree of adhesion on offer. Frankly, I wish I had more time with the car, there’s so much going on at once. It drives like no other hot hatch I’ve ever driven. Crucially, it has a sense of occasion that tugs at your heartstrings like nothing else – apart from another Subaru Impreza, of course. The 20th Anniversary car, admittedly with a few tweaks, stirs the soul in a way that a Golf R could only dream of.

But, then again, a Golf R owner doesn’t have to put up with an interior built from the same materials used in an Airfix model. While the exterior might still look fresh today, the Impreza’s cabin does not. Nevertheless, it does possess a beautiful pair of supportive Recaros and a nice set of analogue, red-numbered dials with an 8,000rpm rev limit – have I mentioned that yet? Alas, thanks to the all-wheel drive system, the boot is smaller than a Fiesta’s and has 25 per cent less luggage space than the saloon it replaced.

If you can live with these things – i.e. if practicality isn’t really your thing and the driving experience trumps everything else – then you’ll struggle to find a more exciting hot hatch anywhere, for any money. And I can say that with confidence because I own one of the most exciting hot hatches, period. Which makes it doubly disappointing that, even with an influx of JDM examples, so few examples of this quality exist.

Sadly for me, the Impreza is just not practical enough for everyday use with a growing family so the hunt for a replacement continues. Luckily for you, FSTi’s Impreza is for sale in the classifieds right now, and I urge you to consider it if you’re in the market for something out of the ordinary. For me, an encounter with the car absolutely confirmed that I need another Subaru back in my life, perhaps just in the shape of a Forester or Legacy instead. Until another day then, old friend.