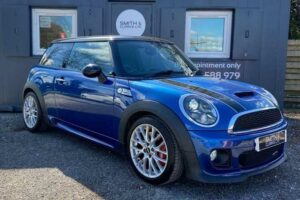 Remember when Minis were fast, fun, AND good looking? It wasn't that long ago…

Credit where it’s due: the 2001 Mini looked absolutely brilliant. Reinventing an icon for the 21st century was never going to be an easy job, but the task was carried out with aplomb. If you see a 20-year-old R50 now – wearing a 51-plate most likely, or one of the very rare ones on a ‘Y’ reg, stop and take a proper look. Those early hatches really were a great bit of design. Need proof? Look at most other small cars out there in 2001…

It would be fair to say that the current F56 generations haven’t won so many fans. Even back in 2014, it looked heavy handed and dumpy in a way that no Mini ever has. The introduction of a five-door car did the look no favours, either. And neither has the latest facelift, to these eyes at least – more is not necessarily better, Mini. And nothing proves that better than the early cars. It’ll be interesting to see how Mini approaches replacing the F56, a car due in 2023, specifically whether styling simplicity can find favour again.

Until then, it’s the second generation of new Mini that seems especially appealing (or R56, for those keeping up). The look was sympathetically modernised from the first one, and it remained renowned for its handling prowess. But instead of having to buy a 15-year-old car (as the youngest R50 Minis now are) there are Cooper S JCWs like this one available from 2013. Might it be the best-of-both-worlds Mini?

It’ll certainly be fast. As one of the late cars, this Cooper S JCW uses the more dependable N18 version of the Prince engine, albeit still with 211hp and 192lb ft; that’s enough for 0-62mph in 6.5 seconds and almost 150mph, which makes it faster than a new Hyundai i20 N. Just. This particular one has the additional appeal of both an upgraded intake system and decatted exhaust – the best Minis are the loud ones, right?

Contemporary reviews praised the JCW’s fizzy, exciting handling, too, another Mini trademark that seems to have been ebbed away slightly in recent years. Yes, it was firm and yes, it was prone to a bit of torque steer, but those looking for a refined driving experience shouldn’t really have been considering a 200hp Mini.

The biggest gripe back then was the price premium over a Cooper S and fairly meagre standard equipment. This one benefits from bi-xenon lights, sat-nav, rear parking sensors and some leather, so it doesn’t seem bare bones. And £12,995 for a 25,000-mile car that looks this good makes it a lot easier to overlook any imperfections; it’ll still be more than a Cooper S but no longer £5k more (this comparable one is £1,500 less), and it’s just about half the new price. Someone will now point out how much a Clio or a Fiesta ST from 2013 costs, which is of course less. At least the Mini’s higher asking price and strong residuals should mean more back, come resale time.

That’s if you come to sell it, of course. Mini’s commitment to an electric-only range means cars like this won’t be made again, yet its relative modernity and decent equipment will keep it usable (and fun) for many years yet. Given some of the BMW Group’s recent work, it’s hard to imagine many better-looking Minis, either. We’ll know for certain come 2041…