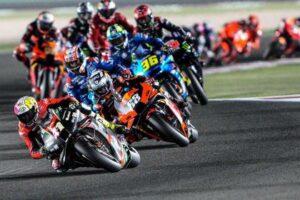 The series will include some of the biggest riders, including Valentino Rossi, Marc Marquez and Fabrio Quartararo.

Following the success of the Netflix series ‘Formula 1: Drive To Survive’, Dorna Sports – the organizers of the FIM MotoGP World Championship have announced a new documentary that will air on Amazon Prime.

The new documentary series will have 8-episodes of 50 minutes each. It will give us a behind-the-scenes look at the premier motorcycle racing championship, just like the Netflix series on Formula 1.

The series will include some of the biggest riders, including Valentino Rossi, Marc Marquez, Fabrio Quartararo, Francesco Bagnaia, Jack Miller, as well as team managers and other important people that are involved in the sport.

The MotoGP documentary series will be produced by ‘The Mediapro Studio’ and is scheduled to release in 150 countries in 2022.