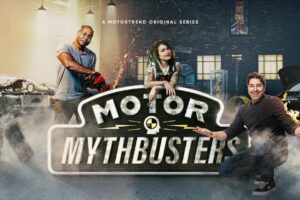 Ever wonder if that crazy car jump in the latest blockbuster action movie is really possible? Or if a regular human being could propel the Flintstones mobile with nothing but their Chevro-legs? The Motor MythBusters team—Tory Belleci, Faye Hadley, and Bisi Ezerioha—has the same curiosity about all things car and are setting out to debunk (or maybe confirm) all of the urban legends, viral videos, and pop-culture stunts we love—using real science. Sound familiar? It should!

Related: While you wait for the Motor MythBusters premiere August 4, take the MotorTrend App out for a test drive with a free trial and stream hit shows like Top Gear America, Roadkill, and the upcoming series Kevin Hart’s Muscle Car Crew!

Motor MythBusters—coming only to the MotorTrend App, August 4, 2021—picks up where the Discovery Channel classic left off, but tackles each myth with a gearhead-minded focus and a more in-depth look at the process—not only the carnage at the end. They’re still going to blow stuff up, though.

MythBusters covered many popular car myths and theories over the years, but they only scratched the surface. Motor MythBusters is taking that to the next level by taking you much deeper into the science behind the explosions and the process of designing and building each test. Tory Belleci of MythBusters is back, bringing his expertise in setting up the myths, fabrication, and a life-long love of cars. His cohosts, Bizi Ezerioha and Faye Hadley, bring just as much passion for autos and their own unique fields of expertise in motordom.

Urban Legends, Custom Cars, and Science: Motor MythBusters has it all!

All those pre-scripted, artificial-drama car shows lack one thing real gearheads love: an in-depth look at the process. We don’t care that the alternator is going to be late or that the supplier doesn’t have the right shade of chartreuse. We want to see the engine get dropped between the frame rails, learn how to even out a skim-coat of body filler, and watch fabricators stack dimes with the tig torch! (That’s welding jargon for the uninitiated. )

“Well, I’m definitely not used to getting paid to DESTROY cars!” Faye Hadley

Sure, stuffing a car with a gasoline bomb and standing behind a blast shield while screaming, “all in the pursuit of knowledge!” sounds like a lot of fun, but do you actually get anything from it? Tory, Bisi, and Faye don’t just want to destroy cars, they want to learn something along the way.

Can you turn back the odometer on a classic Ferrari by driving in reverse? Can you make a turbocharger out of a soda can, a half-empty bottle of nitrous, and a bit of wire!? You don’t have to wait long to find out! The pursuit of knowledge and entertainment comes only to the MotorTrend App, August 4, 2021—sign up today!