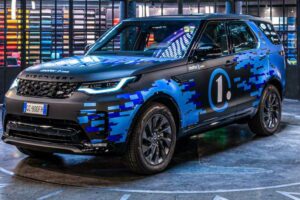 Recognizable at a glance, this Discovery will be the production vehicle for our Italian video team. It’s even got a launch pad for our drones!

This SUV has gone from “Sport Utility” to “Shooting Utility Vehicle.” It’s the Land Rover Discovery, which has changed its skin to become the official car of the Motor1.com Italia video crew.

The Discovery was not chosen at random; it’s is one of the most versatile models in the Land Rover range and our Italian colleagues have turned it into a working tool for video production that will support their YouTube channel.

Recognizing it around Italy will be easy thanks to a special wrap designed just for her. If you’re in Milan in the coming days, you can also see it live at MiMo (June 10-13). More precisely, it will be in Piazza San Carlo, Stand number 80.

The Discovery features a custom wrap whose concept was developed by Garage Italia, while DSW Wrapping specialists took care of the installation.

Inspired by our logo, Garage Italia played with the colors white, matte black, and electric blue. The latter especially plays a fundamental role, because it combines with different tones to give visual dynamism to the “camouflage” effect.

The rear is full color in light blue with some metallic touches, and continuing along the sides, the wheel arches and the hood become taken over by the camouflage pattern that creates a particular optical effect when the car is moving. Not to be missed on the front doors is the large Motor1.com logo, which accompanies our name under the mirrors.

One peculiarity is the modular platform installed on the roof for landing drones, designed and created by DJI in collaboration with Nital.

Our Discovery is based on the standard S model, equipped with the 249-horsepower, 3.0-liter six-cylinder (D250 mild-hybrid) that transmits power to an automatic transmission and then distributes it through an all-wheel-drive system. The configuration, however, was customized based on our team’s operational needs.

Here are some of the accessories we chose:

Our first field test will begin at the end of the Milano Monza Show and we’ll share our impressions as soon as possible together with our backstage videos.