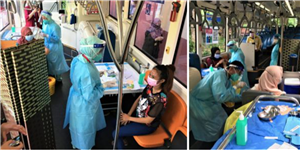 Just like the Rapid Penang bus that has been touring the island as a mobile Covid-19 vaccination centre, two MRT feeder buses are doing the same in the Klang Valley. The buses were part of a vaccination outreach programme (VOP) for the Orang Asli community in Desa Temuan, just off Damansara Perdana in Petaling Jaya.

The use of the buses is part of MRT Corp’s collaboration with the University of Malaya Medical Centre (UMMC) for the latter’s VOP, in support of the VOP of Jabatan Kemajuan Orang Asli and Hospital Orang Asli Gombak.

UMMC medical personnel were stationed inside the buses and equipped with portable tables and other equipment. The passenger seats at the back of the bus became the waiting area for those in line.

The two buses were driven by Rapid Bus personnel. Previously, the buses were also mobilised to transport two other communities to UMMC to be vaccinated. With public transport demand and capacity reduced due the pandemic, this is an example of MRT Corp and Prasarana putting their assets to good use, assisting the country in the fight against Covid-19.