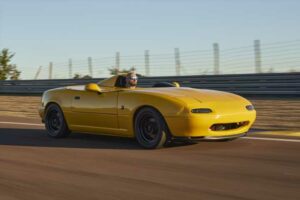 Mazda has been teasing the idea of a true MX-5 roadster for years now, all the way back to the Superlight of 2009. It followed that car up with a 943kg Speedster for SEMA in 2015, and returned a year later with an 898kg (!) Speedster Evo. Alas, nothing quite so extreme has made even limited production, so it’s been the job of the aftermarket to realise the collective MX-5 fantasies. Pretty good job they’ve done of it, too.

The latest is this, the Gorgona Cars MX-5 NM (Naked Monoposto), revealed at Monza as part of a Mazda Italy event. It combines an evolution of the NA shape with the running gear of a new ND 2.0, the result said to be ‘pure analogue driving pleasure’.

The NM is the brainchild of engineer David Galliano and journalist Omar Abu Eideh, both fans of the MX-5 and keen to pay tribute to that iconic original model with something special. In addition to the concepts mentioned above, Mazda also created speedsters of the first and second generations; it’s these cars – the 1995 Miata M Speedster and Miata Mono-Posto from 2000 – that the NM aims to evoke with its head-turning (and face-pummelling) look.

Clearly, the single seat makes it pretty dramatic and Gorgona maintains this is a true ‘barchetta’ as it’s missing a windscreen. There’s more to the NM than just a roof chop, though, with a flat bottom, front splitter, rear diffuser and teardrop shape to the driver’s side hump assisting aero as well. Form following function is ‘dear to Italian design’, they insist.

Furthermore, while the 184hp 2.0-litre engine and six-speed manual are standard (though ma 225hp power kit has been mentioned), there’s plenty about the NM that points to it being a spectacular MX-5 to drive. Most obvious is the weight; Gorgona reckons this car is from 830kg, although that figure is dry with optional even lighter carbon bits, in the best Italian tradition. It’ll probably still save some over a standard NA, and definitely a lot versus the latest model.

Also interesting are the chassis changes that can’t be seen, as the original MX-5 is hardly a paragon of structural stiffness. And that can spoil the fun a bit. The NM boasts torsional rigidity roughly twice that of a regular NA, thanks to higher sills that reach halfway up where the doors once were and welded reinforcements underneath. The new doors are much smaller and lighter, which becomes obvious when you actually look; doesn’t look like it’ll be the easiest to get into. But there won’t be a passenger to worry about, at least. The hump hides rollover protection, and both subframes have been toughened up as well. It ought to be resilient enough now to make for an MX-5 that drives as well as it looks.

Additional upgrades for the Monoposto include coilovers adjustable in compression and rebound plus new brakes. The Enkei RPF1 wheels, so popular on this era of MX-5, are 15-inch diameter here and sit on Yokohama AO52 tyres. The limited-slip diff is carried over with the engine and gearbox from the ND car.

All sounds great, right? The MX-5 restomod that dreams are made of, with a stunning new look paired to a sharper driving experience? Now it just needs to be made. Gorgona is collecting expressions of interest now, with an aim to get the NM homologated and small series production underway. So it might be a little way off yet, but this working concept seems like one heck of a way to announce your intention. Indicative pricing is reckoned to be around 70,000 euros plus VAT and the NA donor car. And they aren’t getting any cheaper. It’ll be a big investment, then, but with Mazda still reluctant to produce its own Speedster this might very well be the only way to go…