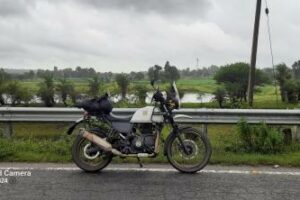 I could feel the motorcycle heating up like my KTM 390 Duke in the city.

BHPian rahul4321 recently shared this with other enthusiasts.

My 2019 Himalayan which has been trouble-free so far faced its first major issue this week at roughly 12,500 kilometres on the odometer.

The motorcycle would run fine for the first 30-40 kilometres. However, after that, the idle RPM would shoot up to about 2000 rpm instead of the usual 1000-1100 rpm making the gear slotting very difficult. The engine heat would also be unbearable due to the high idle rpm and I could feel the motorcycle heating up like my KTM 390 in the city (which was never the case earlier).

So I gave it to the service station and they told me that an Oil temperature Sensor had gone kaput which was resulting in the engine cranking up its idle rpm whenever the oil temperature exceeded a certain limit. I am still not very sure what the connection is between both; the Oil temperature sensor and the engine automatically choose to idle at a higher rpm but they replaced the sensor and after a day of riding – I can confirm everything looks good.

They also changed the rear wheel ABS wire stating it was stretched and worn out. Total damages: Rs 800 inclusive of both (roughly 400 rupees each).

The cone set is making loud thudding noises when it goes over an excessive high bump at speeds / an excessively deep pothole at speeds. So it looks like I will have to get the cone set replaced too shortly.

By the way, has anybody tried this as a permanent resolution? Somebody at the dealership recommended this; not sure if it was another customer or a member of the staff.

Here’s what BHPian DesertLynx34 had to say on the matter:

A fellow Himalayan rider friend and I actually visited them at their garage and he had the bearing replaced and the nylon cap added. He had good reviews. I myself was advised by Mr Zuhaib not to change mine as I hadn’t put in that many km at that point but later on, at around 13k I did change to the NTN bearing and it’s been good so far.