Home » News & Features » My accident story: Importance of wearing seatbelts in the back seat

My accident story: Importance of wearing seatbelts in the back seat 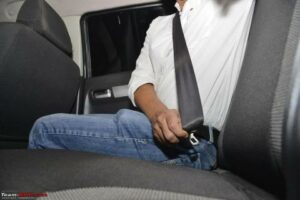 Owning a safe car, and driving to destinations ourselves. I have a strong safety concern while driving, hence 80 is my cruise speed

BHPian fogg_23 recently shared this with other enthusiasts.

We had an accident in May 2022 which opened my eyes regarding safety concerns involving travel in private cars. I will elaborate on our experience below.

Around 2 weeks before our first anniversary, my wife and I had to travel (we took the train halfway and in a car driven by a chauffeur for the second half) to my hometown for some cultural ceremonies. A day later, we returned to Bangalore (a mere 250km) by chauffeur-driven car (the car belongs to my co-brother). The chauffeur is well-experienced and has higher levels of confidence. He was crossing the slower vehicles with ease, and in the back seat, we were decently comfortable throughout. Everything went well till the airport, and the incident occurred a few hundred meters post airport tollgate.

We were in the rightmost line and slowed down at a major speed breaker. Then we heard some screeching noise and a bang. A collision at the left back of our Ford Figo Titanium car (~14 years old), directly behind where I was sitting. I found a jerk in my teeth, and my jawline started hurting. Both of us were not wearing a seatbelt in the back seat. We got down to only witness an Innova in shambles, while our ford Figo got only a small scratch and a minor dent. The driver from Innova came out. He is very (very very) old, he was literally shaking, and I could only feel pity for him. Other passengers in the Innova are also old, and we didn’t even speak a word to them. We moved on.

We were still in trauma, but no injuries were reported from any of us. We thought we were lucky. The next day my wife reported a severe back ache, and by afternoon it was unbearable. We went to Aster CMI in Hebbal, via emergency. The doctors responded quickly, gave her painkillers, and took two CT scans. Nothing is out of order, they said. The trauma led to shock, and maybe a muscle sprain in the back was the diagnosis. The pain subsided a little bit, so went home. At midnight the pain was back, and 102F fever, and at 6 AM, we went back to emergency, begging doctors to admit us. They denied and argued, saying there was no reason to admit it as the tests were not showing anything out of place. When we looked closely, the kidney walls showed a minor swelling, which doctors dismissed by saying it is nothing to worry about. We are back home, calling nurses every twelve hours to put in paracetamol IV to subside the pain. Two days later, we went to Anantapur to get admitted to a hospital with friends in charge.

The Anantapur hospital staff and my mother-in-law nursed my wife back to her feet, and in a week (a day before our anniversary), she was discharged. On our anniversary, we went to a small restaurant and celebrated with paneer tikka and Gobi Manchuria. A full month’s rest at her parent’s home helped her regain her health to the most extent. Now she is doing extremely fine, and I would like to thank God and Ford Figo for strong build quality, which reduced the impact to a great length. On the finance side, Health Insurance from HDFC ERGO took care of all big expenses.

We learned our lesson, but implementation is not easy:

Good to hear nothing serious. Don’t worry, all of us learn some lessons the hard way. Thank you for sharing your experience with us. After Cyrus Mistry’s crash (God bless the good man’s soul), awareness of the importance of buckling up at the rear has greatly spread, and many states are making rear seatbelts mandatory.

Here’s what BHPian Mortis had to say on the matter:

Glad you are well and learned an important lesson that should also remind all of us that seatbelts are there for OUR safety.

Here’s what BHPian Raghu M had to say on the matter:

Just like catches win matches, seatbelts save lives. It is highly taken for granted that in the city you don’t need to wear a seatbelt. I always have my entire family buckle up, you never know what’s in store for you. If you are driving slowly, the opposite vehicles could be doing high speeds. Before the engine fires up, you need to buckle up.