Home » News & Features » My Altroz RPM skyrockets on its own; Engine fails in a cloud of smoke

My Altroz RPM skyrockets on its own; Engine fails in a cloud of smoke 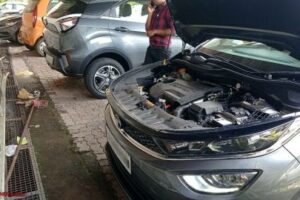 After a month of servicing, the car is now again ready to be delivered.

BHPian jomgeorge recently shared this with other enthusiasts.

We have a Tata Altroz Diesel BS6 that is 5 months old and has covered 12,830 kilometres. One day while me a 12th-grade student, my elder brother, who is a second-year undergrad, and my younger sister, who is in the tenth grade were travelling in this car through a two-lane highway at around 70 Km/Hr. After roughly 30 kilometres, all of a sudden with a loud blasting sound the car’s RPM skyrocketed and went inordinately high, well beyond the limits of the tachometer, with a significant volume of white smoke expelled from the silencer. Everything happened on its own and it was inevitable. We had no control over it. Before we could park the car, it shut off on its own, leaving us with no brakes. The rise in RPM resulted in an increase in acceleration, but owing to timely intervention and luck, we were able to park the car using only the hand brakes. The amount of smoke released by the car in such a short time was more than enough to engulf the entire highway and its environs in smoke. If a car had approached from behind, he would have been in serious peril as well. Fortunately, all of this occurred on a less traffic day, which meant that a multi-vehicle catastrophe was averted. I also discovered that the engine oil was almost an inch above the maximum level. This might be the result of the occurrence. When I tried to start the car later, it wouldn’t, so a recovery vehicle was called. Even the RSA was not responding and had to wait 4 hours waiting for someone to arrange a Recovery vehicle

Due to my dread of death that day, I investigated this thoroughly even during my exam days and realised that the condition was strikingly similar to a Diesel Engine Runaway. And in that situation, if the engine dies before we can stop it, the engine has unquestionably failed catastrophically. For those who are unfamiliar with diesel engine runaways, I’ve included a link to a Team-BHP page where you may learn more.

The service centre had no idea what had transpired, and it was their first time dealing with a situation like this. They further asked at every Tata service centre in Kerala to see whether any similar incidents had ever been reported. However, there was none. All of this occurred, according to the service centre’s account on behalf of the Tata technical team, due to an excessive flow of fuel through all injectors. All of the injectors were determined to be defective and clogged. I was curious as to how all of the injectors could fail at the same time and cause a fuel overflow. After further investigation, they discovered that the cylinder and pistons had been damaged, necessitating the replacement of the whole engine assembly. Beyond that, they had to replace all four fuel injectors, fuel pump, turbo and catalytic converter.

I questioned them about the car based on the information I acquired from my research in order to assure our continued prosperity while driving the car, and they frequently had no suitable responses and were ignorant of such possibilities at the time of inquiry. They just stated that various components had been changed, without explaining why. They changed the engine on their own before informing anyone.

The car was ready to be delivered after a few weeks, and I went there a week later to inspect it. I started the car, and when I turned the steering wheel slightly, I heard a lot of creaking, rattling, and grinding noises, which eventually became a knocking noise at one point. After we started the car, it also emitted a foul stench, which they had answers to why it happened. The car was then returned to be repaired. They informed me the next day that the noise from the steering wheel was because of leaving the car unused for a week. I was wondering whether leaving the car unused for a week would cause such a loud noise.

However, I’m glad we’re still alive to report this. After a month of servicing, the car is now again ready to be delivered. I just wanted to verify Tata’s rationale before getting the car back. Can any other parts be damaged except the ones they’ve replaced? Like the alternator compressor and other components that are all driven by the engine RPM? It would be much better if others who are more knowledgeable about this one-of-a-kind scenario could offer their knowledge. Should I inspect anything in particular before getting the car? Here’s what BHPian vishy76 had to say on the matter:

This incident is bizarre, but not unexpected. I remember another gentleman on the forum reporting an issue with his injectors and also claiming that a certain batch of Altroz diesel has defective injectors. This is the link IIRC.

I believe what has happened here is the same. The injectors have basically stuck open. Instead of spraying a fine mist of highly atomised diesel in the combustion chamber, the injectors would spray blobs of fuel in huge quantities. This increased fuel flow leads to a rise in RPMs. Apart from leading to a rise in engine speed, this also causes oil dilution.

During the compression stroke, when the piston moves upwards, the diesel which isn’t atomised correctly doesn’t burn completely and the piston ends up compressing liquid diesel. Under pressure, the liquid forces its way past the piston rings below and into the oil sump, thus diluting the oil. This explains why you saw the oil level beyond the full mark on the dipstick. Oil dilution is a dangerous phenomenon. If left unresolved, the diesel present in the oil will portray detergent properties and start washing the oil off from engine components such as bearings. It will effectively negate the lubricating properties of the oil.

If the entire engine assembly has been replaced, I wouldn’t worry much TBH. Parts like the alternator and compressor can be left alone. I just hope a pre-assembled engine was put into your car, and not some sort of a “half-job” where the service centre reused some of the older engine internals.