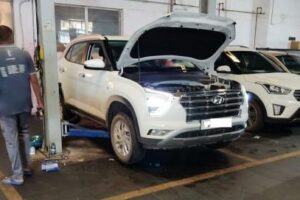 I was requested to not write an email to the company because that would cost the service advisor his job.

BHPian SolidusSnake recently shared this with other enthusiasts.

I had taken my Creta for its 3rd service yesterday and as per routine procedure engine oil was drained before fresh oil could be put in. Then the wheel alignment guy came in and sat in the car and to my utter shock started the car!

As the service advisor is known to me, I relented and said that CRM should write a mail to me acknowledging the incident, which she wrote on the second try (in the first mail she simply said an incident occurred without describing it).

Now what worries me is that these turbo GDi engines are very sensitive and whether this incident would impact the longevity of the engine and the full impact of this incident may reveal only after some thousand kms. I am in a dilemma that whether should I let go of the incident or pursue it further.

Sheer carelessness on the part of the employee.

If the car was switched off within 30 seconds, there will not be any lasting damage.

Here’s what BHPian CrAzY dRiVeR had to say about the matter:

Had an incident which was far worse, but on a much simpler engine. My old bike (a Bajaj Pulsar 180) was delivered post-first service without engine oil and I rode around a few kms before realizing this from the changed engine sound.

The dealership gave their mistake in writing and also agreed to provide an additional year (2+2+1) of dealer warranty for any engine issues that may arise. Needed none of that though- the bike ran without any issues till around 10 years/56k kms when I sold it.

Would advise the same here – get the dealership to admit in writing that they will take care of any issues that will arise. Since you immediately noticed the incident and got them to switch it off, I think there may not be any issues after all.

Here’s what BHPian tjsi had to say about the matter:

Well you can’t really actually drain all of the oil from the engine, some amount is always left behind, so unless they really, really flushed it out (which is unlikely) then probably no critical damage was done.

The technician surely needs to be sent back to training though. The negligence is increasing across all service centres, even the Honda and Toyota ones are caught slacking.

I wonder what really happens with our cars when we’re not present there.

Here’s what BHPian shankar.balan had to say about the matter:

Oh no! This is just completely stupid.

Now, for exactly how many seconds did the engine remain on? It is important to diarize this piece as well.

While the oil indeed is drained there will still be a thin coating of residual oil but this is not sufficient to keep the engine lubricated. Therefore you absolutely have every right to inform HMIL CRM or even higher authority.

Here’s what BHPian MT_Hyderabad had to say about the matter:

My questions to you would be the following:

If the engine was immediately switched off, no damage is foreseen.

Although I am very envt. conscious, but in this particular case, I would recommend running the engine with the old filter and new oil for 15 mins and then draining the oil and then refilling with the new oil and new filter.

This drained oil should be observed for metal particles, if they are observed, I leave it up to you what to do.

As the incident happened yesterday, I would recommend getting new oil filled from them today/tomorrow as a courtesy; of course free of cost.