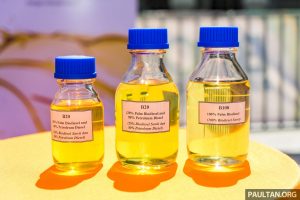 The government is delaying its B20 biodiesel mandate by six months, with the fuel now expected to roll out nationwide in early 2022. The programme was launched in February last year, with Langkawi and Labuan the first locations to implement its use. It was also announced then that B20 would be fully available across Malaysia by June 2021.

The delay was revealed by plantation industries and commodities ministry secretary-general Ravi Muthayah. Speaking to Bernama, he said that the revision to the timeline was to give priority to the government’s post Covid-19 economic recovery plan, which is more crucial. “We have limited resources and must identify priorities,” he told the national news agency.

“We have implemented the B20 programme in Langkawi and Labuan as well, and next we will proceed to Sarawak and Sabah, once we have upgraded the depots,” he added. The new fuel – which consists of 20% palm methyl ester and 80% regular diesel – will eventually replace B10 biodiesel at over 3,400 stations nationwide, except in the Cameron and Genting Highlands in Pahang and Kundasang in Sabah, where B7 biodiesel will continue to be used. Retailers will also continue to offer B7 Euro 5 diesel at selected stations.

The revision to the deployment of B20 could also alter the timelines for the planned implementation of B30 biodiesel, which has been targeted for a 2025 introduction. The push for B30 biodiesel will further boost the use of palm oil, of which Malaysia is among the top producers in the world.

In related biodiesel developments around the region, Indonesia, which is the other country in the top two palm oil producer list, says its plan to roll out a B40 mandate could be delayed beyond the end of 2022 as a result of the pandemic.

Lab tests are still ongoing and are expected to be completed sometime in the first half of this year, with road testing to follow. It remains to be seen if compatibility with engines will be an issue – the Indonesian automotive industry believes that 30% is the maximum blending that can be used.

END_OF_DOCUMENT_TOKEN_TO_BE_REPLACED

END_OF_DOCUMENT_TOKEN_TO_BE_REPLACED
We and our partners use cookies on this site to improve our service, perform analytics, personalize advertising, measure advertising performance, and remember website preferences.Ok