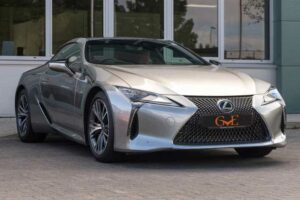 We rather like the Lexus LC. It’s hard to not respect a car that does things so differently in 2021. And, let’s be frank, doesn’t it look fantastic? It’s butch and purposeful but somehow also quite understated, with a cabin that’s comfortable and functional in equal measures. Anyone impressed by the wall-to-wall digital displays found in most rivals might be left underwhelmed, but those who prefer their car interiors to be a little more on the analogue side will find plenty to like.

In fact, analogue is often the a good way to describe this grand tourer. Yes, it has en electrified powerplant in L500h form and there’s 299hp and a 4.7-sec 0-62 time to go with that, but the engine still feels naturally aspirated and the car’s character feels closer to that of something from a previous era. Which, in a sea of tech-focused alternatives, has its merits.

Much of the car’s inherent relaxed nature is liberated by the car’s plus-2.0-tonne kerbweight, which, combined with a powerplant that likes to be revved (despite the V6’s hybrid power, torque peaks at a rather conventional 4,900rpm), ensures any sudden requests for performance are normally met with a more progressive building of thrust. Also, despite being fairly firm riding, the LC never feels completely dialled into a B-road or particularly communicative through its controls. A Porsche 911 is in another league when it comes to mechanical involvement.

Yet it’s still so easy to love. Being a genuinely leftfield choice obviously does it no harm. Rare is cool. Then there’s the fact that anyone buying an high-end LC is doing so not because they want the latest gadgets or to beat their mates at a game of pub Top Trumps, but because they want a handsome two-door coupe with an engine that breathes the same air pressure as we do.

The coupe’s case is made stronger when it’s a low mileage used example that’s up for £20k off list. The LC500h you see here has covered only 4,000 miles in four years, and it’s not lacking anything of note compared to the latest WLTP version because Lexus’s updates have been light. So you’re looking at a car that’s about 35 per cent cheaper than a new one, and probably better, too. Talk about sweetening the deal.