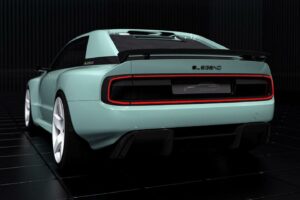 Does a proposed 816hp output do the rally classic justice?

How do you feel about old classics being brought back to life as electric powerbanks? A massacre, or a great way to enjoy those retro icons in the years to come? The latest effort comes from E-Legend, a German start-up that has created the EL1 as an all-electric homage to the Audi Sport Quattro S1. If you squint, you might be convinced. From a large distance.

There are the prominent headlights and bulging bonnet that are obviously similar to the Audi, as are those three small air vents, pronounced wheel arches and rally-inspired five-spoke wheels. According to Auto Motor Und Sport, E-Legend founder Marcus Holzinger, a former VW designer himself, was responsible for the concept’s styling, having been preoccupied with the original since his father worked on it.

It’s powered by three electric motors which combine to produce an impressive 816hp and a 0-124mph time of less than ten seconds. The battery even has a range of up to 248 miles – enough, the firm claims, to complete two laps of the Nürburgring when driven in the hardcore SportPlus driving mode.

Those quick-charging battery modules are thought to be shared with the Porsche Taycan with a sophisticated liquid cooling system also in place. For now, E-Legend has just unveiled the concept, with a working prototype proposed for next year.

The original Audi Sport quattro was first introduced in 1981 as the first rally car to effectively use all-wheel drive and went on to become the benchmark for followers fitted with the same drivetrain. The homologated S1 version came along in 1984, with the most notable changes including the exaggerated overhangs and huge rear wing. It also got a shorter wheelbase and noticeable weight reduction thanks to an increase in kevlar and aluminium. The true power output was believed to be in excess of 500hp, reaching 0-100km/h in 3.1 seconds.

As for the EL1, E-Legend would like to build up to 30 examples in partnership with German prototype specialist, Roding. It has suggested a unit price of 1.06m euros, which is a snippet over £856,000. Which would you choose?