The Yamaha MT-07 was first launched in 2014 and since then, it has become a favourite among enthusiasts who are looking for a fun motorcycle with good performance on a decent budget. Now, Yamaha is all set to launch the new-generation MT-07 globally in the next two years and Yamaha has already began testing the model. With the testing equipment on board and the camouflage, we believe these are still early days of testing for the motorcycle. The current model gets a 698 cc cross-plane parallel-twin engine and from the look of it, the test mule’s plonked with the same engine. But, with the Euro V emission norms coming in by 2021 too, Yamaha will mostly update the components and maybe even offer variable valve timing technology like the India-spec Yamaha YZF R15 gets. 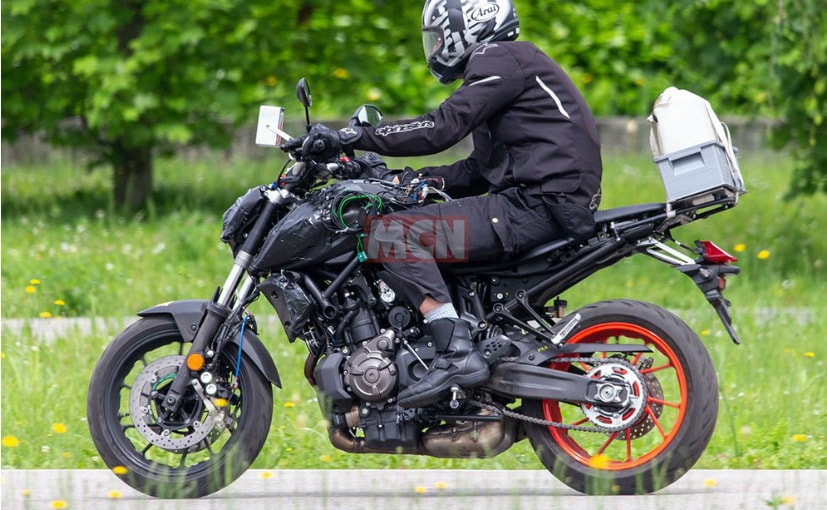 Some of the other updates that we could figure on the test mule are a bigger instrument console and maybe Yamaha will also give the new MT-07 a full-colour TFT screen like on the KTM 790 Duke along with features such as Bluetooth/smartphone connectivity. The headlamp design looks new and the yokes for the front suspension are different too while the telescopic suspension unit looks to be the same. This could mean that the steering geometry be slightly different than the current model. (The updated MT-07 could possibly get more electronics such as traction control, riding modes and so on)

The pipes and wires around the wheels and brakes suggest that the new-gen model might get electronics such as traction control, riding modes and so on. Yes! The current model is a bare-basic kind of a model. The MT-07 is a part of a motorcycle segment which is very competitive and currently it lags in the features department and with the new model, it will be right up there with the others in the segment such as the Ducati Monster 797, Triumph Street Triple S along with the KTM 790 Duke.