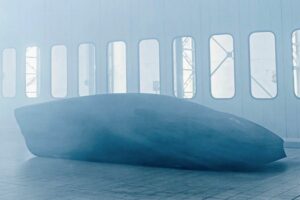 There aren’t many more iconic or instantly recognisable cars than the Lamborghini Countach. This was peak 1970s and ‘80s supercar, with air vents the size of mini fridges and, on later models, a rear wing so big that a whole family could shelter underneath it.

The spoiler is arguably one of the best-loved styling features of the 80s Countach, but you’ll probably know that it actually hindered performance rather than helping it. So it’s been binned for the Countach reimagination that Lamborghini has just teased, in this silhouetted picture at least.

The teaser doesn’t tell us much, just that the new car will have a similarly wedgy shape to the original Countach, and that it’ll have an overhanging rear end. But it’s clear that the modern-day Countach will be more aerodynamic.

Another teaser has been leaked on Instagram. Reportedly from the exclusive Lamborghini Unica app, the teaser shows a set of air vents and the car’s fuel filler cap. Combined with the lack of rear spoiler, it seems this new Countach will be inspired by earlier versions of the Miura successor.

The car’s name seems to be the Lamborghini Countach LPI 800-4, with 800 being the power (equivalent to 789bhp) and the ‘4’ designating four-wheel drive. ‘LPI’ was previously used on the Asterion concept, and stands for ‘Longitudinale Posteriore Ibrido’’, meaning that the car will have a mid-mounted engine with hybridisation.

It’s not clear how much electrification we’re talking about. The mild-hybrid V12 from the Lamborghini Sian seems likely, but it could have more electrification than just a token starter-generator – it could, perhaps, be a full hybrid or even a plug-in hybrid.

Judging by Lamborghini’s teaser, the model is ready to be unveiled. Monterey Car Week is taking place at the moment, with The Quail happening on 13 August and the Pebble Beach Concours d’Elegance on 15 August. We’d expect to see it showcased during one of these events, especially as there’ll be an anniversary celebration for the original Countach.

We’ll bring more information when we get it. But for now, are you excited about a new Lamborghini Countach?