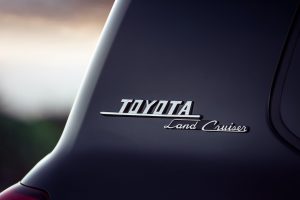 The next-gen Toyota Land Cruiser SUV is due to look a lot like the current one. Well, that’s if spy pictures of the internally named 300-series Land Cruiser that recently appeared on social media sites are to be believed.

Admittedly, the evolutionary styling of Toyota’s newest iteration of its flagship SUV comes as little surprise. After all, the big box’s basic design has remained much the same for decades. Still, images posted to the Instagram account “Land Cruiser Updates” give us a better idea of what to expect from the new Toyota 4×4, including its redesigned front and rear ends, as well as its interior.

While the latest Land Cruiser appears to maintain the current 200-series model’s big and boxy stature, it does appear to adopt more modern design details. Better yet, the next-gen SUV’s styling looks more cohesive. Credit a mug that cleanly merges the Land Cruiser’s headlight decor with that of its massive grille, as well as taillights that better blend into the vehicle’s shapely rear haunches.

Bigger changes, however, seem set to appear within the new Land Cruiser’s cabin. Whereas the current Land Cruiser features a dashboard design with an upright center stack, the new one seems to incorporate an angled setup that locates the SUV’s infotainment and climate controls within an easier reach for the driver. As in other Toyota products, a big infotainment screen juts up from the top of the stack. Switches for engaging various off-road toys seem to confirm the 300-series Land Cruiser won’t lose any of its predecessors’ off-road capabilities. In fact, we wager this Land Cruiser will only improve upon the off-tarmac competence of the current model.

Alas, it seems we Yanks might not want to get too excited about the new 300-series Land Cruiser, as Toyota apparently has no immediate plans to ship it to our shores. Nevertheless, the SUV’s Lexus-badged luxury counterpart, the LX, is still due to make its way to America. While the 300-series-based LX is likely to sport vastly different styling from the new Land Cruiser (both inside and out), the Lexus SUV still ought to maintain much of the off-road kit of its Toyota kin as well as its basic proportions. Whether Lexus satiates our off-road desires by offering the next LX with an off-road package that adds the likes of knobby tires and possible alterations to the front and rear fascias to improve the SUV’s approach and departure angle is still a mystery. Still, we can dream.