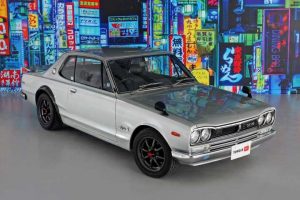 This Hakosuka is 50 years-old in a matter of months – best get it bought then!

Despite the passage of so many years – perhaps because of them, in fact – the story of the Skyline GT-R is always worth repeating. It’s best told here, in fact, with a video produced by Nissan almost a decade ago simply titled ‘Start of the Skyline Legend’.

The Skyline was originally a Prince-produced car, the company acquired by Nissan in 1966. It was in 1964, however, that Prince and the Skyline made an indelible mark on motorsport history. At launch in the late 50s the Prince Skyline made a mere 60hp, but then a bright spark at the firm decided to fit a 2.0-litre straight six from the Gloria that they also made, with plans to take it racing. Homologation requirements meant that 100 cars had to be made, a number just about reached in time – an array of Skyline GTs competed in the GT-II race at the 1964 Japanese GP.

Fuji had never seen a race quite like it. Ultimately a Porsche won, but a Skyline driven by Tetsu Ikuzawa led for a period, which sent the home crowd wild. The handling certainly left something to be desired thanks to the modifications made to accommodate the engine, but that day at Fuji, where one GT led for a bit and five finished in the top six, secured the Skyline legend.

Prince became part of Nissan in 1966, a new ‘C10’ Skyline came in 1968 and the now-hallowed GT-R badge debuted in 1969. It had been saved up for something really special. Desperate to beat Porsche, Price followed the Skyline mid-engined racer called the R380; back at Fuji in 1966, the R380s took a one-two. The 24-valve straight-six from that car was developed further by Nissan for the GT-R installation, creating the legendary S20. Its performance was extraordinary: the KPGC10, as the Hakosuka was most formally known, dominated Japanese motorsport, at one point taking 49 victories on the trot. And you thought the racing exploits began with the R32…

That sort of history and significance, combined with the original GT-R’s unmistakeable look and searing performance, made it a Japanese icon. Those really into their JDM specials treat the Hakosuka with reverence; not just because of what the badge became, but because of what it represented more than half a century ago. Cars like this, along with the Toyota 2000GT, Honda S600 and Mazda Cosmo, marked the end of Japan’s time as a nation known only for building basic four-wheeled transport; it was going to make truly exciting, desirable cars, properly announcing the nation’s car builders to the world.

Understandably, not many Hakosuka GTRs are to be found in the UK five decades later, but this one looks little short of perfect. It’s a two-door, the model that arrived a couple of years after the four-door saloon, and is in fact 50 years old this July. It isn’t standard – note the arch extensions and the Watanabe wheels – but rather like Subarus with gold wheels, it almost seems strange not to have them. And look at that negative camber!

Imported by Torque GT in 2015 and now offered by them again, this Hakosuka has covered just 900km with its sole UK owner. Which might be seen as a missed opportunity, though it does mean the car presents perfectly for whoever wants it next: a total of 91,423 kilometres is less than 57,000 miles, which the condition attests to. The engine bay housing that magical straight six is pristine, the interior is immaculate, the bodywork brilliant – it seems a proper stunner. Of course, anything high performance and this old is going to require some TLC along the way, but what a place to start from.

Torque GT currently has the GT-R listed as POA. For some idea of pricing, this Hakosuka – yes, incredibly, there are two for sale currently on PH – is on offer at £140k, unmodified and also looking sweet as anything. So that’s your ballpark. Which, conveniently, is exactly what this 911 S from the very same year is for sale at. And very nice it is, too. But should our numbers come in this weekend, there’s only one 70s’ silver sports car we’ll make a beeline for – the incredible old Nissan.