Home » News & Features » Nissan Z Proto: Here's What We Learned After Seeing It in Person

Nissan Z Proto: Here's What We Learned After Seeing It in Person 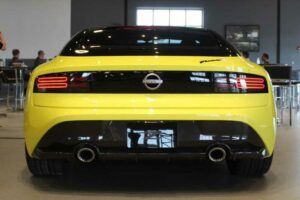 It’s been a few months since we first laid eyes on the new Z Proto but we finally know when to expect the production version. As such, Nissan’s been trotting a yellow show car all around the country and we got a chance to check it out in person. It looks pretty good and, more importantly, it’s reportedly very aesthetically similar to the final production car we’ll see in August.

I asked you last week what you wanted to know about the new Z Proto while I was at this Nissan event. I’ve got some photos and I have some answers to your questions. Mostly photos, though. That’s because soon after arriving, Nissan’s reps said they couldn’t share any more details of the car other than what’s been released currently. But the good news is it leaves you and me free to speculate wildly here until more concrete details come out. 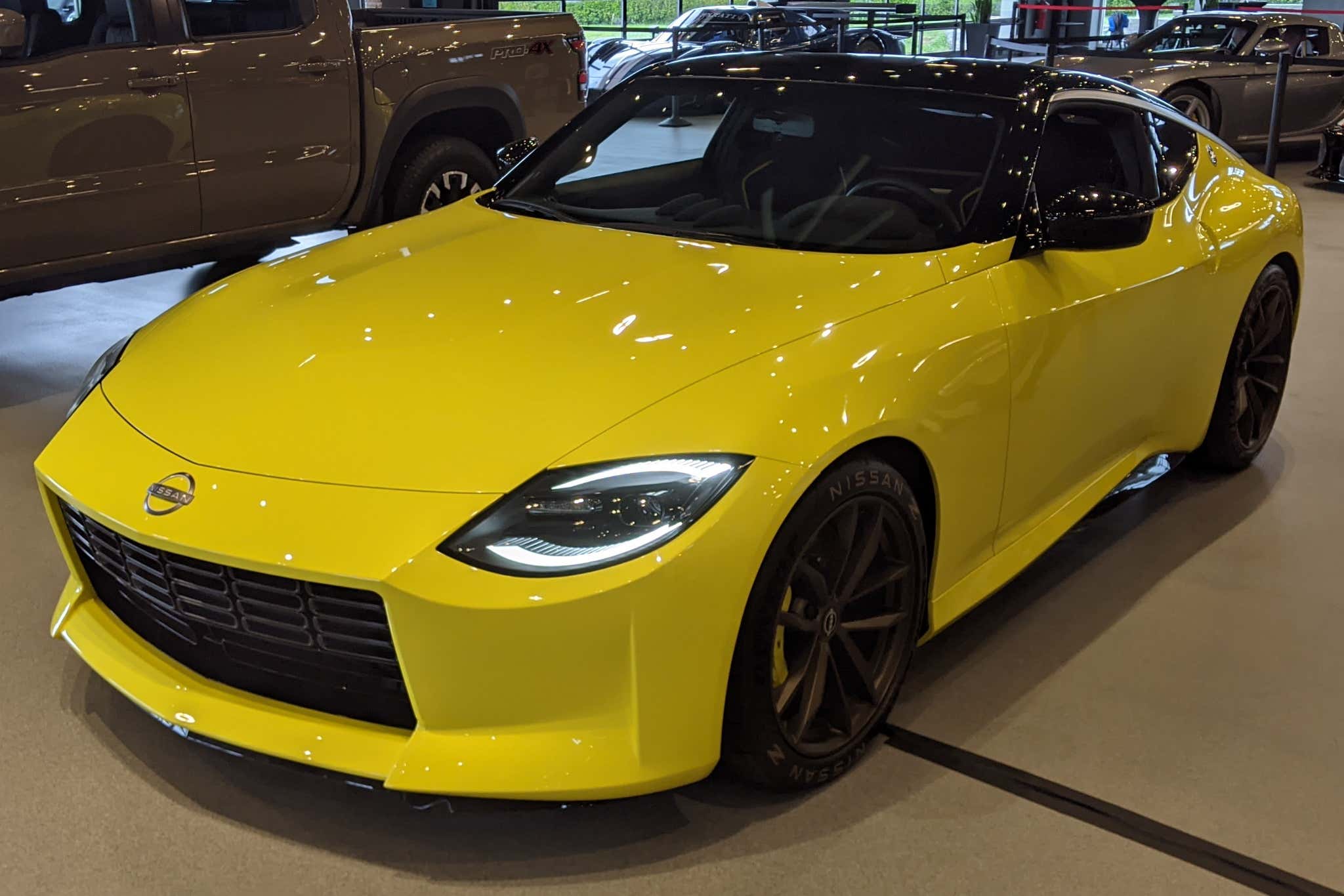 First off, the car looks much better in person than it does in photos, especially the front and rear fascias. Standing in front of it, the nose sits lower than it appears in most photos and overall, it’s a small car—probably not much larger than the current 370Z, if at all.

This particular prototype is likely built on a largely unmodified 370Z platform. Emphasis on “this particular prototype.” The car I walked around is a show vehicle with limited functionality. The Nissan representative told me the doors don’t open and the hood can’t be popped. Or, at least, neither of those things could be done for me at the event. So the car is a prototype through and through: questionably representative of a future production model, though it’d be strange for Nissan to change any of that majorly since it’s already shown everyone this thing.

You can tell it’s a prototype as soon as you look under it, which I did. The entire underside is quite clearly a 370Z—comparing photos of the two cars’ undercarriages will reveal that pretty quickly—and the exhaust system is routed around existing parts with room to spare, just to get everything working together. 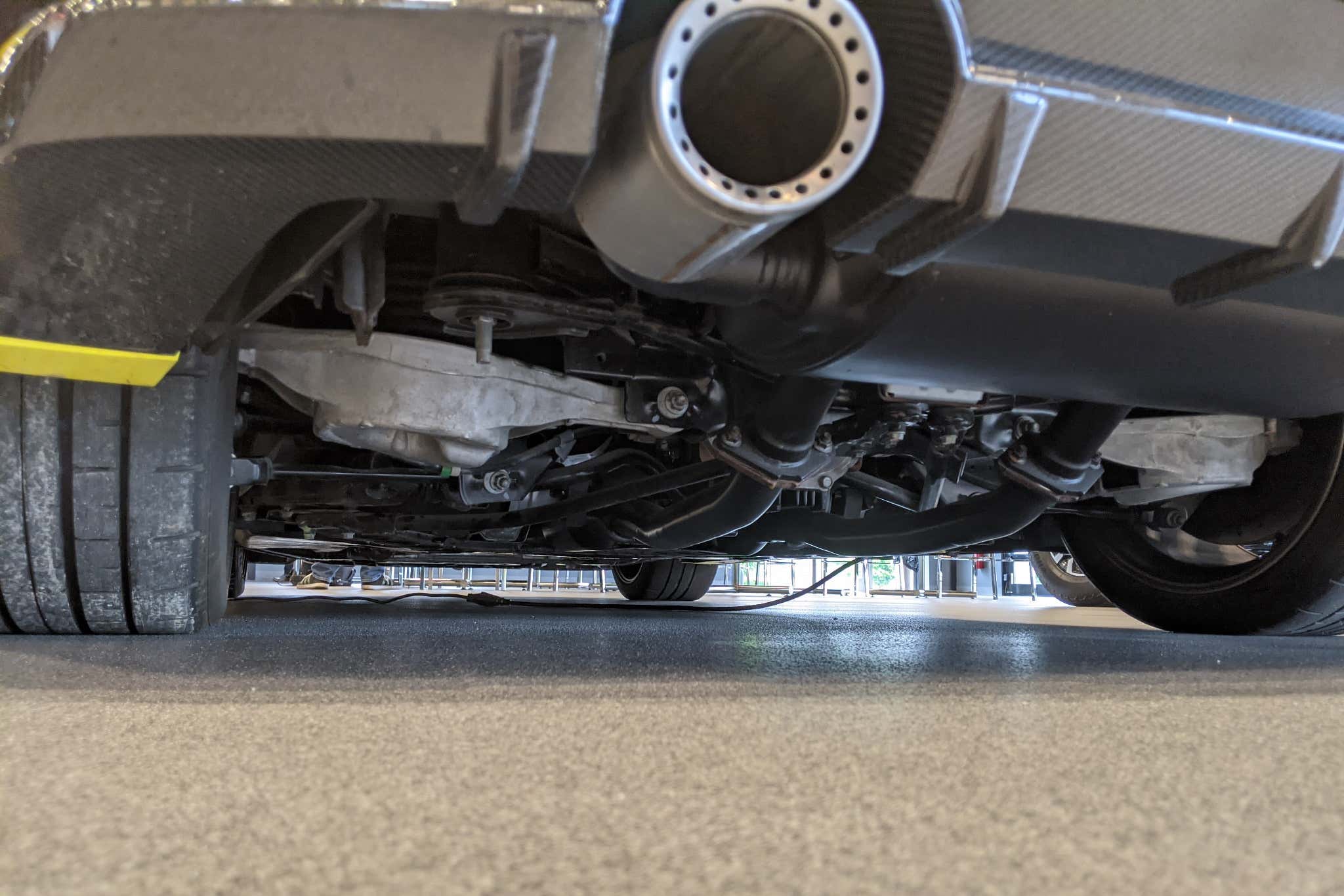 Few other technical details are discernable, except for the tire sizes. They are 255/40/R19 in the front and 285/35/R19 in the rear. That’s a tad wider in the back than the similar, outgoing 370Z Nismo and Infiniti Q60 Red Sport I reviewed a few weeks ago, despite the two cars potentially having the same engine.

Both the headlights and taillights have a fair amount of depth, as does the grille which actually tilts inward quite a bit and steps down as it gets lower, as you can see from the fifth image in the set. Also interesting is a distinctive hood, reminiscent of previous Z cars, and a really nice body line that travels the length of the vehicle. The front and rear fenders, likewise, flare out aggressively and the rocker panels feature a carbon fiber lip to contrast the styling lower down on the profile. 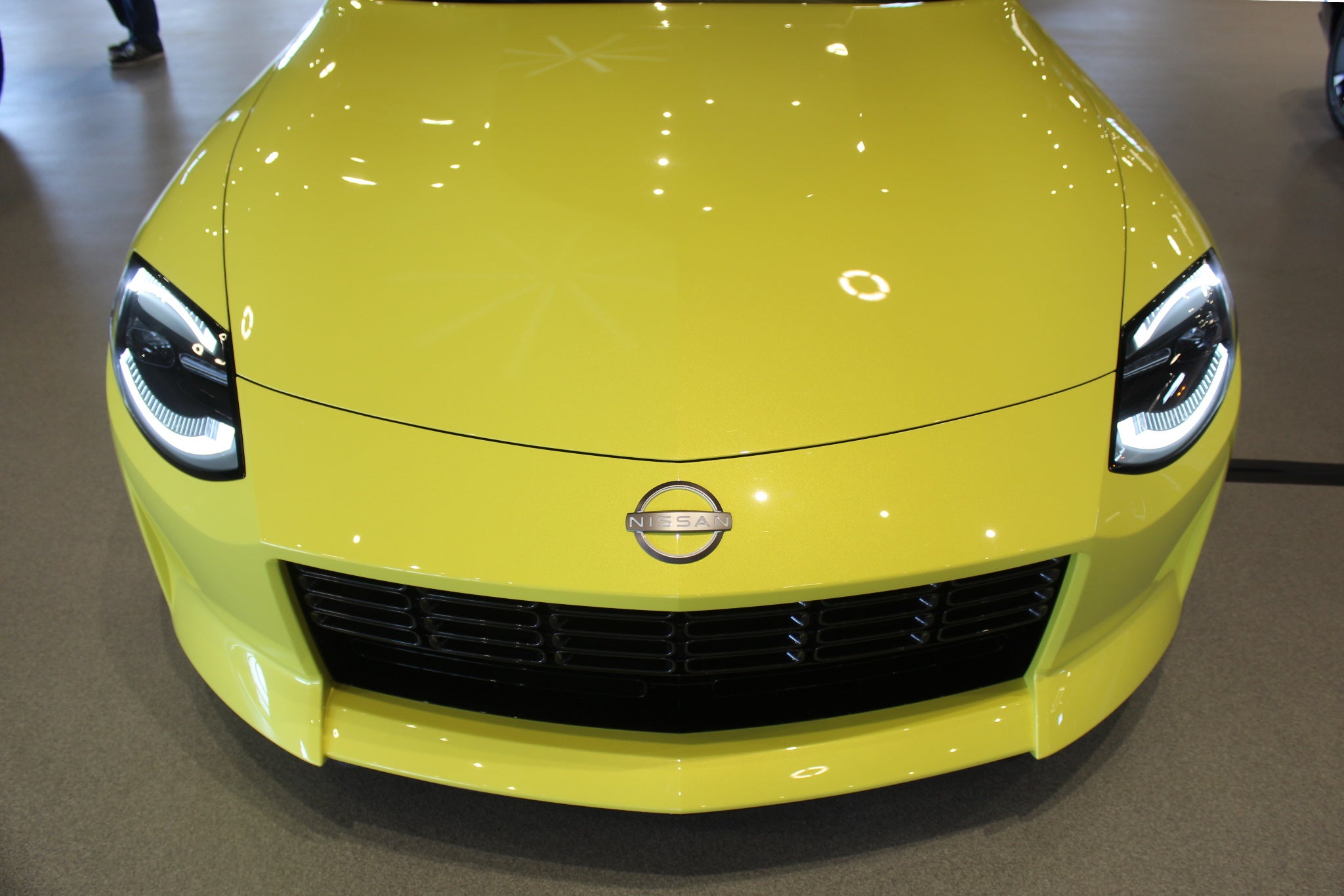 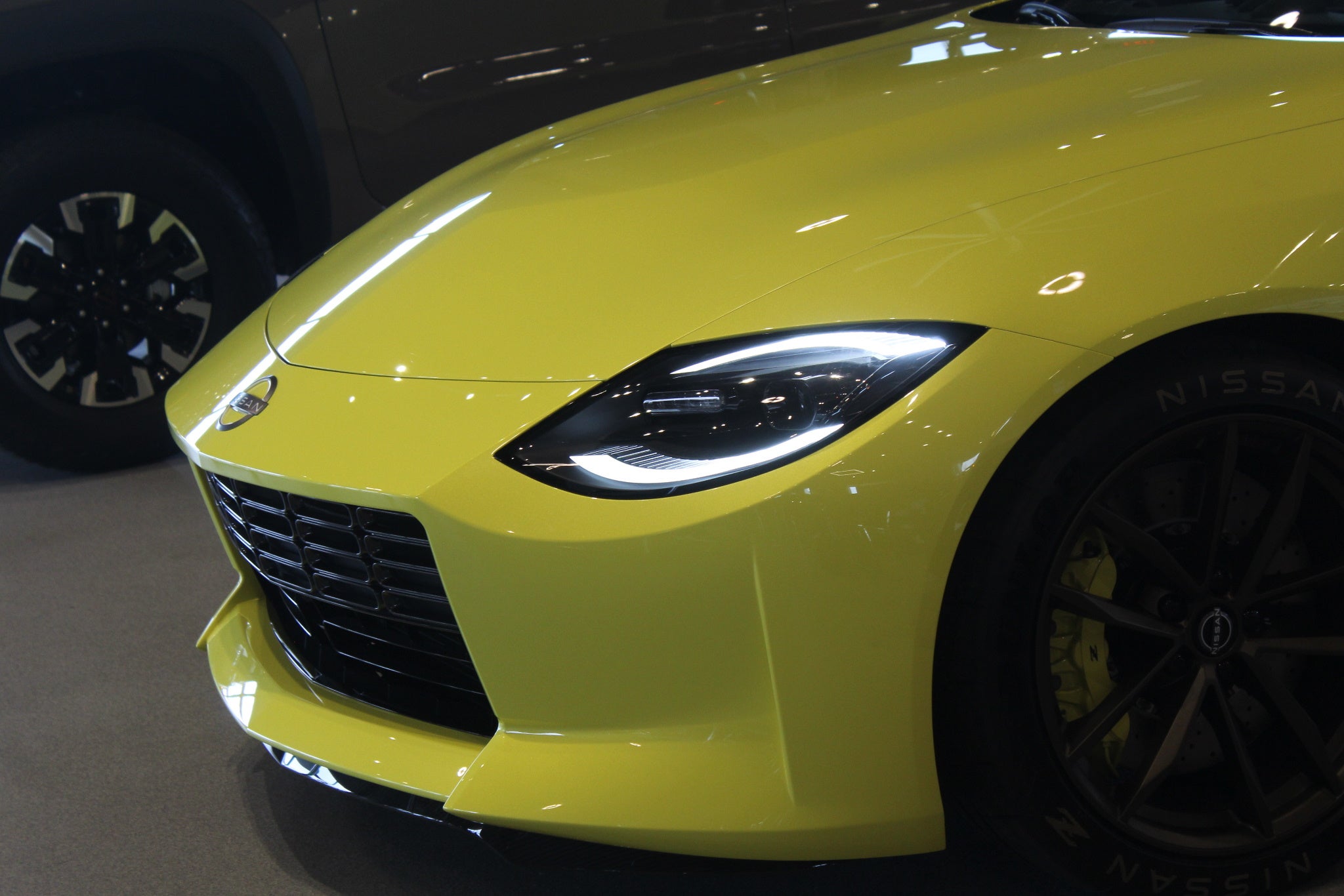 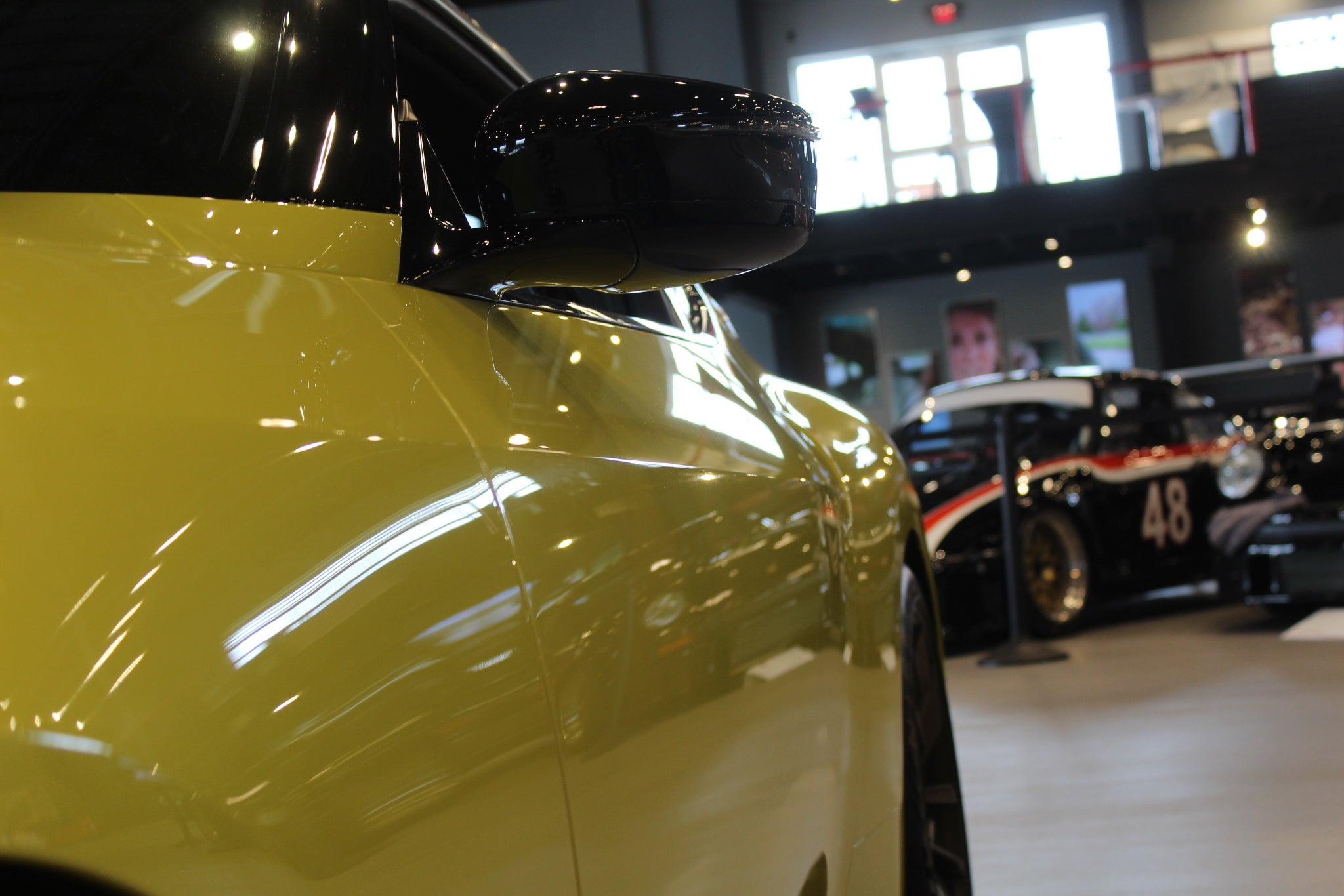 The rear end is really the best part, though.

The design—which takes serious inspiration from the old 300ZX—rejects the squared-off form that’s popular on other sports cars like the BMW M4 in favor of softer bodywork that tightens around the rear tires as it gets lower, making the whole body fit nicely over its wheels. Likewise, the cutout for the exhausts extends up higher than on many other vehicles. It fills the negative space that may otherwise make the rear look bulbous and contrasts the bright yellow paint very nicely as well.

The taillights are also pushed all of the way out to the corners of the body, making it appear wider. At the same time, the negative space between them is filled with a wide sheet of black plastic to pull it all together. Attractively done if you ask me, and especially good in person. 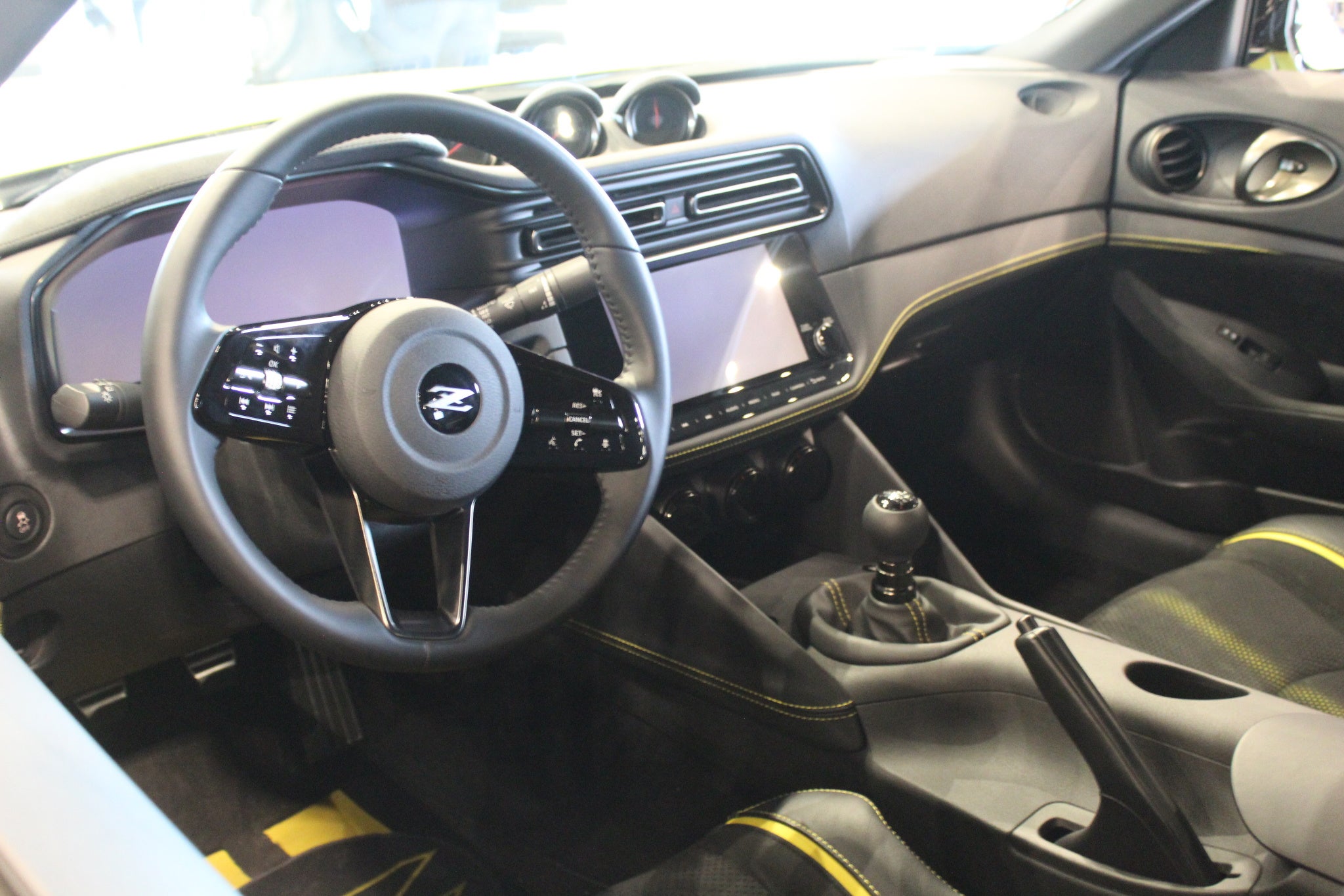 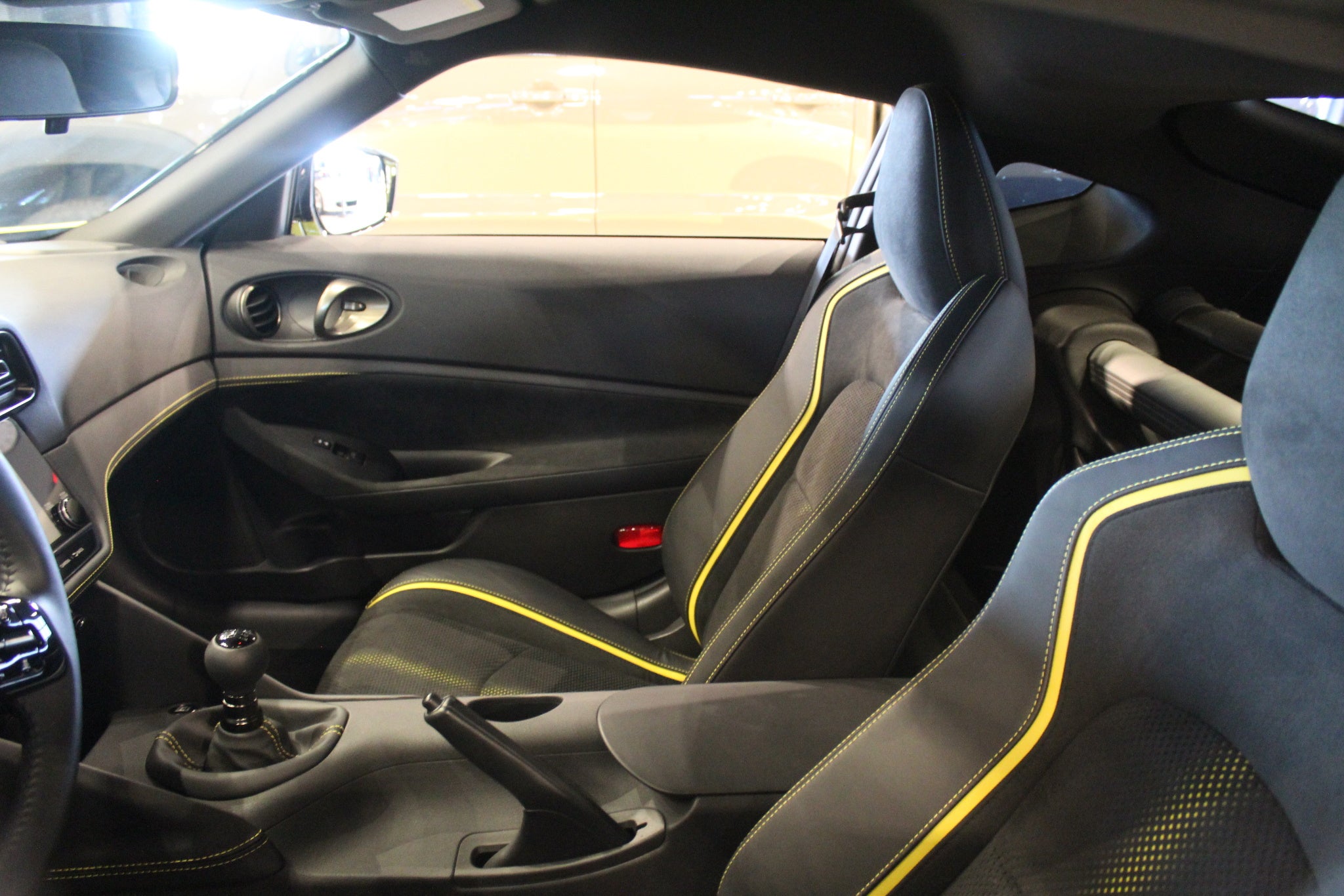 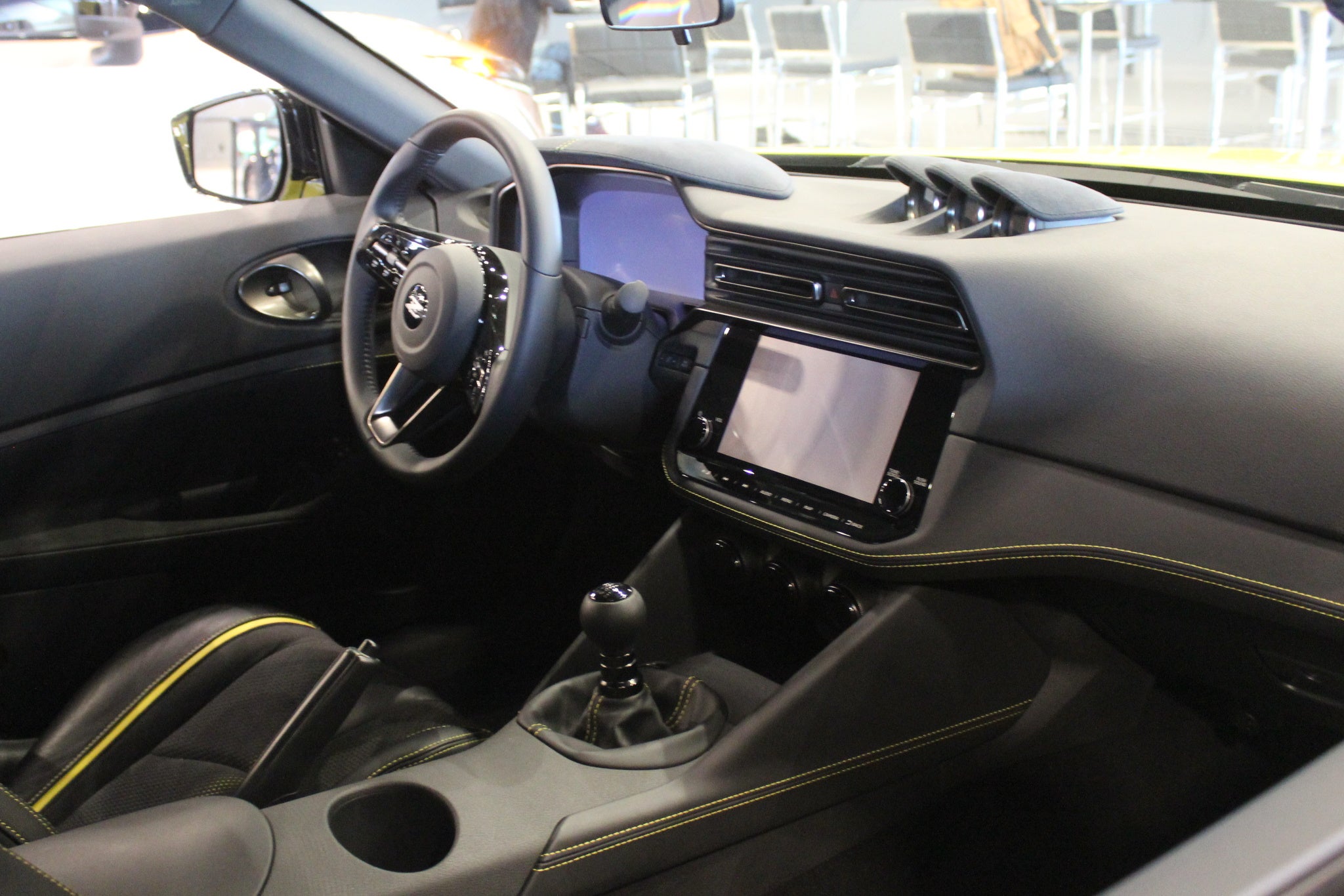 Without a big infotainment screen sticking out of the top of the dash like a miniature drive-in movie theater, the interior feels a tad outdated, but I think it’s for the best. It looks modern enough. Otherwise, it appears functional but certainly could be a little fresher with the addition of frivolities like accent lighting, which appeared to be missing here. The window switches and some of the other buttons appeared a little dated, like some of the switchgear in the Sentra I reviewed, but those are small issues that in no way make or break the new Z’s cabin.

There’s the classic three-gauge stack Z cars are known for sunk into the dashboard, a digital instrument cluster, and of course, a six-speed stick. The seats looked nicely contoured and there’s an interesting use of textiles on the seating surfaces. Hopefully some of this good upholstery makes it into production.

Answering Your Questions About the Z

Since Nissan wouldn’t tell me much about future specs, the only questions I could really answer were design- and dimension-oriented. Everything else is based on compiling all the leaked information I currently have at my disposal.

Q: Please describe the cargo capacity.  I don’t expect to fit a family of five in there, but would there be room for cat carriers in back?…Basically, could it replace a GTI for someone more concerned with carrying stuff than passengers? — divbyzero

There is about three feet of space behind the crossbars you see pictured above. The roofline isn’t super high and I couldn’t climb back there to get a great idea of how big it was, but there’s a reasonable amount of space for something like a cat carrier. I think one or two would definitely fit.

I’m not sure if it could replace a GTI just because of the roof height and lack of rear seats, but the existing space in the new Z is longer than it appears in the image I posted.

Q: If you can grab a picture or two of the back hatch area with a flash, that would be great. Most pictures of that area so far have been pretty dark and lacking detail. — Eric Arnsbarger

Unfortunately, the car’s rear glass is completely blacked out, which made it hard to take any photos from the outside and the inside. It was difficult to focus either my phone camera or my DSLR back there for the same reason, but I got the best I could without being able to climb into the car.

Q: When does the production version go on sale, how much will it cost (Supra 3.0 money or Mustang GT money), is it on a new platform or an updated version of the 370Z’s (how much is carried over if the latter)? — Matthew L

Orders for the new Z will allegedly begin on Nov. 15, 2021, although with the state of global supply chains, who really knows. The Bronco, for instance, has been delayed several times already. As for when they will ship to dealers, Nissan is already clearing out 370Z stock, but a formal date for deliveries has not been made public. The car will be formally revealed on Aug. 17, 2021.

The cost for a base model is allegedly $34,995 (excluding necessary destination fees possibly between $1,000 and $1,500) if this forum thread is to be believed. There’s apparently going to be three trims above that, each reportedly costing around $5,000, which means a top-trim Z will likely be in the neighborhood of $46,000. Supposedly, every new Z will get a 400-plus horsepower VR30DDTT—though spy photos of the prototype suggest that output may be slightly higher.

As far as what has been re-worked on the platform, I don’t know. It could be anything from a light suspension refresh with new tuning for the springs and dampers to completely new hardware. We’ll get all of those details when the car is formally released and we’ll certainly do a deep dive.

Q: How much does it weigh? — ShuldaHadUhV8

Base dry weight is rumored to be 3,252 pounds. Since all Zs are expected to get basically the same drivetrain outside of transmission options, the curb weight shouldn’t fluxuate by more than a couple of hundred pounds. Electrification is also reportedly not going to happen at least until 2025, so there won’t be an especially heavy hybrid Z for now.

Q: Can we see it in anything other than bright green? — SuperShep

Yes. Two other cars have been spotted in different colors. You can see a silver one here and a slate-colored one here. A car with a blue interior has also been sighted, if you’re interested in interior color options. Other colors that Nissan will reportedly offer include all the current 370Z colors, the yellow from the prototype, and a new orange.

Q: Are they going to have any retro feeling colors like a brown or gold? — AdamVIP

Leaked information says retro colors will be available down the line, although specifics are not available at this point.

Q: What will be the transmission specs as far as gears, ratio, final drive, etc?  Will it be a direct carry over from the 350/370? — angel

The transmission is reportedly the same or at least similar to the one found in the current 370Z. An automatic transmission is going to be an option, too; we’ve seen an automatic shifter in leaked photos. It is rumored to be a nine-speed automatic from Mercedes. There’s been talk of the two brands working together on the car before, which backs up this claim.

Let me know in the comments or via email if you’d like to see anything else on the prototype and I’ll go through my photos to see If I have something that will satisfy your request!

You can reach the author here: [email protected]