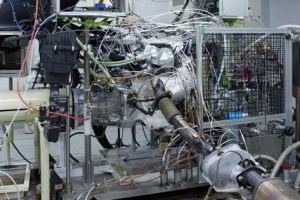 Petrol engines are actually pretty wasteful. The majority of the energy generated from the combustion cycle goes to waste through heat and sound in even the most efficient power plants, but there are improvements to be made on this front in ICE’s twilight years.

Nissan is cooking up a new engine that has already achieved 50 per cent thermal efficiency in testing. For a lot of people reading this, some context is required, which we can give via the 1.6-litre turbocharged V6 used by the Mercedes-AMG F1 team. It’s the most thermally efficient internal combustion engine produced thus far, and it also manages 50 per cent thermal efficiency.

One of the most thermally efficient production powerplants out there meanwhile is Toyota‘s ‘Dynamic Force’ engine, which manages 41 per cent. We should imagine Mazda’s spark-controlled compression ignition SkyActiv-X unit at least manages a similar figure, potentially a better one (we’ve asked Mazda UK if it can reveal some numbers).

50 per cent, then, is an incredible achievement. The number isn’t entirely comparable, however, and as for why, the clue’s in the branding – ‘e-Power’. The engine won’t directly power the wheels – it’s instead used as a generator for an electric motor. This allows it to stay at the optimum engine speeds for the best trade-off between power and efficiency.

Like the SkyActiv-X engine (above), Nissan’s new powerplant uses a high compression ratio to combust a lean fuel/air mixture. On that subject, Mazda said a few years ago that it was working on something called ‘SkyActiv-3’, which could reach a staggering 56 per cent efficiency, rivalling the emissions of some fully electric cars depending on the charge source.

We don’t know when either SkyActiv-3 or this new version of Nissan’s e-Power will reach production. Regardless, it’s interesting to see that the humble petrol engine still has a few tricks up its sleeve while manufacturers turn their attention to batteries and motors.