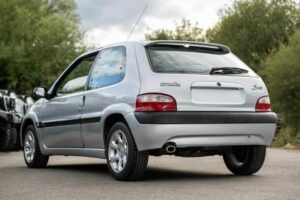 Finding any decent Saxo VTR nowadays is a feat; discovering one with fewer than 10k miles is a miracle

It can be easy for some to dismiss something like the Citroen Saxo VTR as just another cheap and cheerful old car. But for those who grew up car crazed around the turn of the century, the VTR represented something far more important – it was freedom. And fairly fast freedom, at that. The hot hatch had suffered a fairly ignominious decline in the early 1990s, with insurance premiums effectively killing cars off. The result was slower, heavier, safer replacements that never caught the imagination quite like their predecessors. Think Mk3 Golf GTI, Ford Escort Mexico, Fiat Bravo HGT and so on. The mid-1990s wasn’t a great time for the hot hatch, really. Until the French revolution…

The Peugeot 306 GTI-6 is the obvious pin-up of the era, though the Saxo VTS perhaps best represented the light, raw, fast pocket rockets of the previous decade. It had 120hp and weighed as much as a Kinder Egg, which guaranteed entertainment. Trouble is, it didn’t solve the insurance problem – group 14 out of 20 back then was high. Step in the VTR, with sporty looks, decent performance thanks to a 90hp, eight-valve version of the VTS 1.6, and a much more palatable group 7 insurance classification. Then there was the marketing masterstroke – two years free insurance on VTRs for two years. You had to be 21 to qualify, but even at that age it saved buyers potentially huge amounts of cash. VTRs flew out the door as a result.

Then they started flying into other things as well, usually large and immovable objects, and the Saxo numbers declined almost as fast as they had shot up. Back then nobody saw Saxos has anything worth preserving, especially once the scrappage schemes came in, only for the industry to rapidly transform towards much more complex small cars. The simple pleasures of old are now highly prized again.

We’re going to take a punt on Miss Goodwin, this Saxo’s first and only owner, not requiring the free insurance that so enticed young drivers into the VTR. If she did, then it wouldn’t have been much use – the little Citroen had only covered 2,000 miles by the time of its first MOT in January 2006. The miles have slowly crept up since then, a couple of hundred each year, meaning this Saxo was tested in February of this year with just 8,135 miles recorded. Next year it’ll be 20 years old, and more than likely won’t have reached 10,000 miles, which is almost unbelievable for something like the VTR. Most surely got to 8,000 miles before the first owner’s 22nd birthday.

It’s even better than that mileage would imply, complete with dealer plates and surviving stickers, LloydsTSB motordirect mats, the original stereo, stacks of paperwork and next to no wear. Even before Saxos went out of production, they were known as sparse, no-frills transport, and it really is incredibly basic in there. Probably quite cramped, too. But it has been beautifully preserved, and what a trip back in time the VTR promises to be for those who remember them from so long ago.

In this condition, it’d probably have to be kept for best now, which surely nobody ever imagined for a Saxo. But given they were never known as the safest little cars, the VTR – even with what look like new and plump Michelins – probably isn’t one to drive now like you did in the early 2000s. Not least because it’s more of an investment now as well – it’s up for sale at £13,995, so it might be the most expensive Saxo ever. But, well, find another, before somebody else who also very fondly remembers them finds it. Opportunities like this come up pretty seldom, and nostalgia is a powerful influence, which is why cars like the Saxo and 106 command so much – and a contemporary like the Fiesta Zetec S remains affordable. Insurance ought to be a bit cheaper now, too…